Article: What is LiDAR? 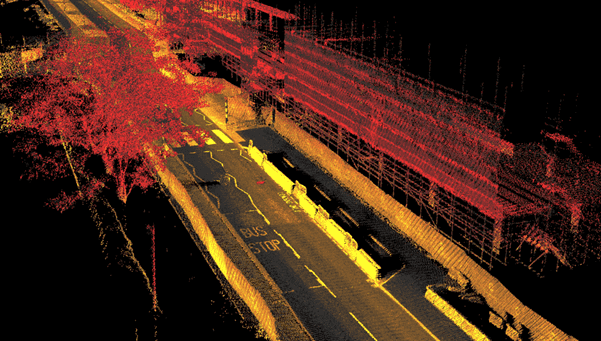 OxTS has released the following article explaining the basics of LiDAR and how it is used for applications such as UAV (unmanned aerial vehicle)-based mapping. OxTS provides a range of GNSS-aided INS (inertial navigation system) solutions that are used to enable high-accuracy LiDAR scanning.

At OxTS we often work with LiDAR. What is LiDAR? LiDAR (Light Detection And Ranging) is a method of measuring the distance to objects around the LiDAR device. It works in a way analogous to Radar, hence the similarity in the naming, but uses lasers instead of radiowaves. Lasers typically work with much smaller wavelengths than radiowaves (~5 cm in Radar) which gives LiDAR the distinct advantage of greater resolution. Finer details can be detected. Utilising lasers also allows for the immense strides in laser technology to be brought to bear, giving us very powerful technology in small and affordable packages. Unfortunately, this also means that the range of effectiveness and penetration of LiDAR is severely shortened from that of Radar. 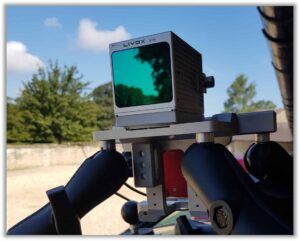 The basic function of LiDAR is to emit laser pulses from the device which then hit an object, reflect, and are registered by the device when they return. Using precise timing information, the device knows the time of flight of the beam between its emission and its reception and calculates the distance to the object using the time and the unchanging speed of light. If the device knows the angle of the pulse in the horizontal and vertical plane and the distance to the object, then it has all that is needed for a 3D picture to be built up in spherical coordinates. This means every point measured will have its 3D position known with respect to the LiDAR coordinate frame, its time of recording, and the intensity of the reflected beam.

This allows LiDAR to map its immediate environment. The more laser pulses that are sent out the more effective it is at doing this. Many LiDAR devices will have fixed channels of laser beams which build up a 3D picture in ‘slices’ of the surrounding area, each slice being a conical surface from the LiDAR. You can see this from the screenshot below taken from Velodyne’s viewing software. The VLP16 LiDAR has 16 laser channels this can be seen when the device is stationary by its 16 ‘slices’ of the environment. Others have intelligent ways of varying the directions of the beams to fill in the gaps. Other LiDAR will use a single channel to map out the 3D space. 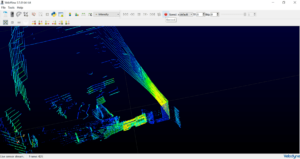 There are many different types of LiDAR spanning a range of applicability, performance and physical characteristics. Much LiDAR that is commercially available works mechanically. Using a laser, mirror and mechanical rotation the laser channels map out the 3D environment. In the diagram below, taken from the Hesai XT manual, you can see how the laser inside is split to give 32 laser channels that are emitted out of the device. These each have a fixed elevation angle. Mechanical rotation then rotates the channels in the horizontal plane to cover a 3D area. 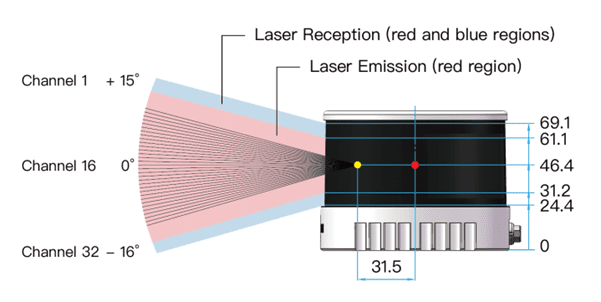 Another form of LiDAR technology that is becoming more common is solid-state LiDAR. This technology is bringing high precision LiDAR with no moving parts to a much lower cost base. Solid-state LiDAR has no moving parts as it utilises printed on silicon chips making production perfect for scaling and the devices very robust. It is likely that these LiDAR will find themselves in a whole host of systems in the near future. At OxTS we are interested in the use of solid-state LiDAR particularly in the automotive sector where it is being used to provide sensor data for autonomous driving systems.

We combine LiDAR with navigation data for one of its main uses, mobile mapping surveying. Very precise navigation data is needed to pair with LiDAR to achieve the level of precision of which it is capable. If LiDAR is accurate to millimetre or centimetre-level then navigation data also needs to be accurate to this level of precision. This often makes the navigation device the bottleneck for error within the total system. Getting survey-grade LiDAR pointcloud data requires a surveying-grade INS with powerful IMU and GNSS receiver technology, tightly combined in a Kalman filter. Navigation data allows the frames of LiDAR to be combined into a usable post-processed pointcloud.

The precision and density of LiDAR data make it useful for a huge number of surveying applications. Aeroplanes can carry LiDAR for long baseline geographical surveys and UAV multicopters can carry LiDAR for highly precise road or building surveys. LiDAR data can also be combined with camera data to give further dimensions to a pointcloud such as RGB data that is needed to give realistic digital twin models to real-world landmarks. The uses of LiDAR are so varied and its applications so far-reaching that it is quickly becoming the principal surveying sensor technology.

Our smallest, lightest and most affordable INS. The xNAV650 is the ideal companion for UAV mapping