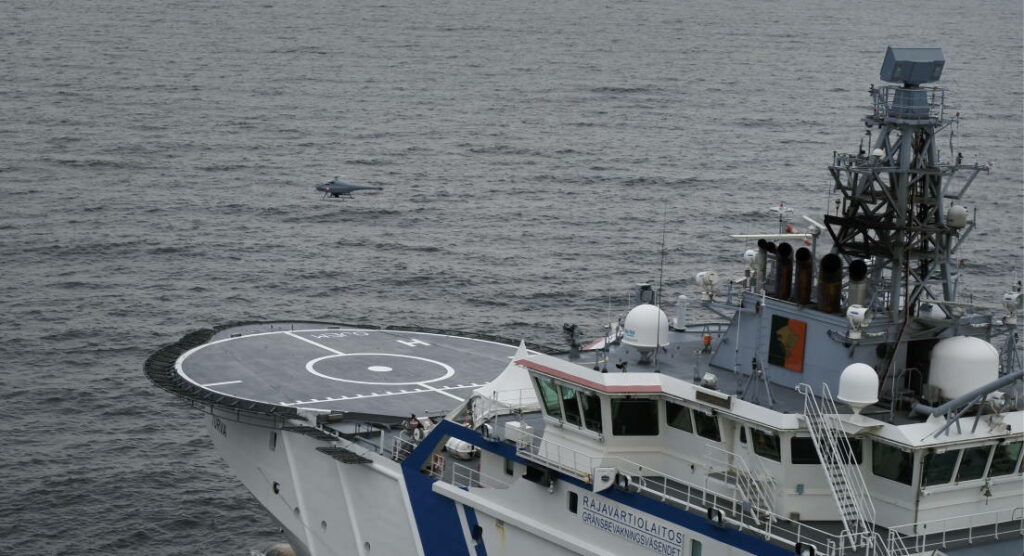 UMS Skeldar has confirmed that its V-200 helicopter UAV (unmanned aerial vehicle) has successfully completed a five-day series of surveillance flight trial demonstrations aboard the Finnish Border Guard vessel OPV Turva. The flights formed part of the Valvonta2 project, which is funded by the European Maritime and Fisheries Fund and aims to achieve an understanding of how authorities could use UAVs for diverse and demanding operations at sea both now and in future scenarios.

During the trials, the V-200 completed multiple operational flights and successfully demonstrated a range of features including automatic take-off and landing (ATOL) capabilities; vessel identification at different ranges and altitudes; search and rescue during both day and night; AIS; and transponder demonstrations. The unmanned helicopter was equipped with a multiple sensor suite of Automatic Identification System (AIS), Wescam MX-8 Electro Optical and Infrared (EO/IR) sensors as well as the high-capacity Leonardo Pico-SAR Synthetic Aperture Radar.

The V-200 is the unmanned maritime platform of choice for a range of governments and institutions, and has previously been selected by the German, Royal Canadian, Belgian and Royal Netherlands Navies. It provides embedded ‘eye in the sky’ intelligence, surveillance, and reconnaissance (ISR) capabilities to enhance its capacity to perform primary and secondary missions.

Stefan Hyltberg, Programme Manager for UMS Skeldar, commented: “These flight trials demonstrate that the Skeldar V-200 platform is the perfect fully-developed ATOL choice for maritime missions. Its adeptness at operating from a range of naval ships using the market-leading heavy-fuel engine from Hirth Engines in combination with its multiple sensor carrying capability give the Skeldar V-200 a real advantage over its competitors. Our team is proud to have its work recognised by the Finnish Border Guard.”

“As we have proven with these trials, the Skeldar V-200 continues to provide best-in-class capabilities for customers. Continuous development of our Skeldar V-200 and V-150 aims to not only validate the platforms’ capabilities, but also analyse customer requirements with a view to increase the service suite UMS Skeldar provides.”