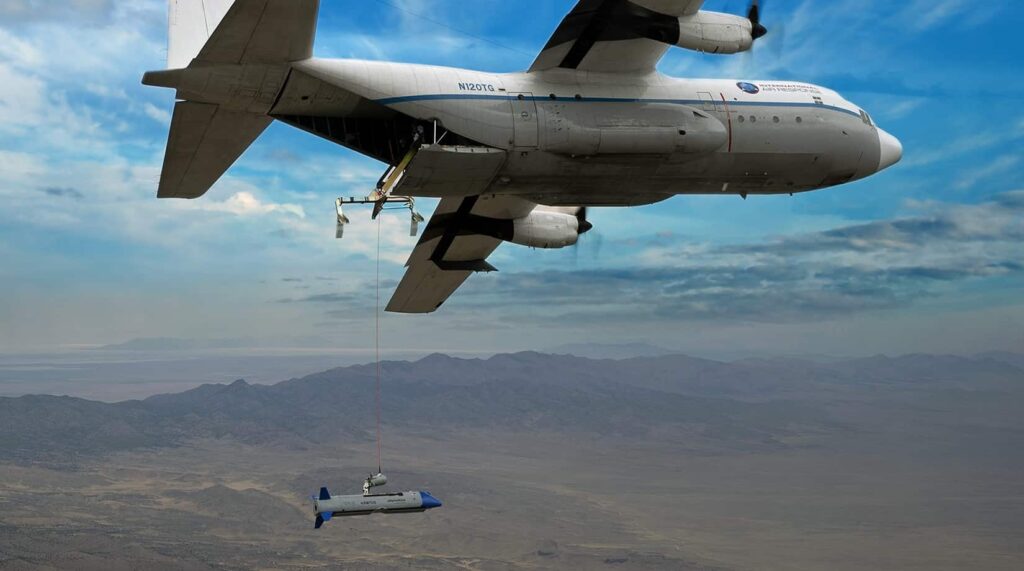 The X-61A UAS flew for a total time of 2 hours and 12 minutes, moving in formation with a C-130 aircraft from as close as 125 feet back and 125 feet below the C-130’s position. At the end of the test, the GAV was recovered on the ground using a parachute system.

The roll-on/roll-off recovery system (which includes the physical structure, the docking structure, the towed, attitude-controlled “Bullet” and the in-flight stowage system) performed as designed. Marvin Hill, Dynetics X-61A recovery system chief engineer, stated: “As we expected, reeling the GAV in while docked on the Bullet, and then securing it inside the C-130 cargo bay is a safe and benign activity. It’s like fishing in the sky, except the fish weighs 1,200 pounds.”

Dynetics and its team of industry partners was one of four teams awarded a Phase 1 contract for the Gremlins program. Two of these teams received a Phase 2 contract, and the Dynetics team was named top performer prior to the start of Phase 3. The maiden flight of the X-61A occurred in November 2019, with the aircraft flying as predicted with no anomalies in the operational system.

Tim Keeter, program manager for the Dynetics Gremlins team, commented: “We have taken a major step forward towards accomplishing airborne recovery, and we are ever so close to achieving it. Our second GAV flown to date performed very well, which increases our confidence in the X-61A. And for the first time, we rendezvoused and flew in close formation with the recovery C-130 multiple times using the Gremlins Autonomous Docking System (GADS). Multiple captive tests were also conducted for the first time, with actively-controlled GAVs attached to the stabilized towed docking device. This demonstrated the ability of the recovery system to safely reel in and stow GAVs once they have docked. The data collected from these tests will provide the necessary information to perform final tuning of GADS.”

“We’re excited to continue our progress with the Gremlins program. This is what we’ve been working towards for the past four years, and we are eager to advance the Gremlins system’s capabilities for DARPA and the warfighter even further. Rapid and reliable airborne recovery is a game-changing capability for autonomous, distributed airborne operations. Our entire team brought about a disciplined test demonstration and moved the program forward. We believe Gremlins will advance operational flexibility and effectiveness in the near future.”

Brandon Hiller, Dynetics X-61A chief engineer, said: “Our team was excited to fly the GAV for a second time following the delays caused by the global pandemic. While we successfully tested both the GAV and recovery system, we decided during the mission to stop short of docking. We now have additional data, which will help us tune the system and further validate our models. These results are encouraging and present higher confidence to achieve airborne recovery in our next flight.”