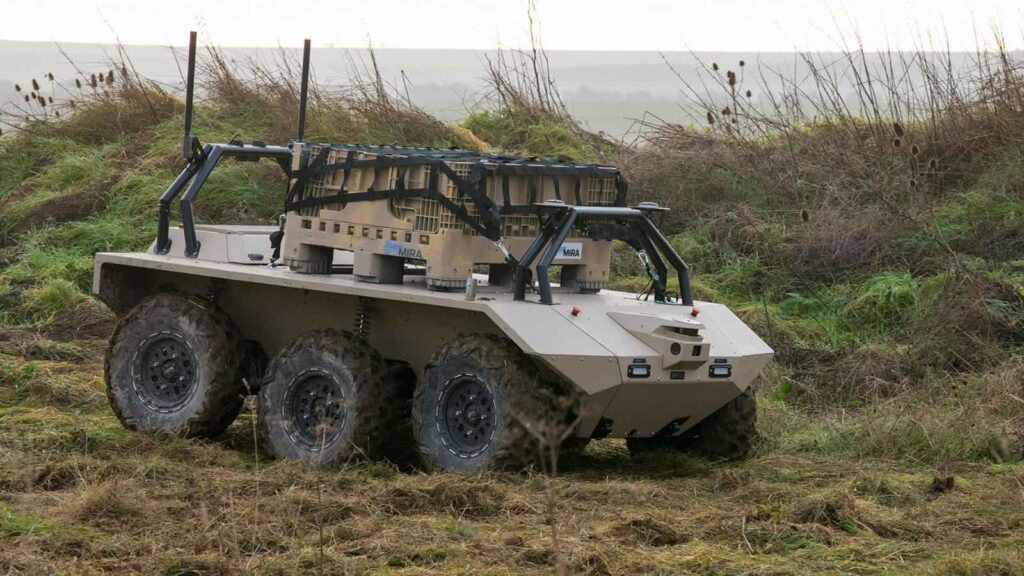 Domo Tactical Communications (DTC) has confirmed that its IP Mesh radio technology has been selected for integration into the Viking unmanned ground vehicle (UGV). The Viking is being supplied by automotive and defense engineering firm HORIBA MIRA to the UK’s Defence Science and Technology Laboratory (Dstl).

The Viking is a 6×6 UGV designed to transport up to 750kg of supplies over long distances in rugged terrain conditions. Procurement and trial of the Viking is being funded under the Joint Tactical Autonomous Resupply and Replenishment (JTARR) Risk Reduction in support of Project Theseus, which aims to develop experimental autonomous logistic resupply systems that will reduce risk to front‐line soldiers.

Key to the communications capabilities of the Viking UGV are the NETNode 5RM IP Mesh Radio and SOLO8 SDR‐H handheld Software‐Defined Radio (SDR) unit from DTC. Both systems are based on the company’s state‐of‐the‐art COFDM IP MANET MIMO Mesh technology. This provides robust performance and high data rates at distance, even under challenging, dynamic real‐world conditions and in congested urban environments and NLOS applications.

The NETNode 5RM IP Mesh Radio, featuring built‐in dual HD video encoders and GPS receiver, provides MIMO (Multiple Input Multiple Output) MANET (Mobile Adhoc Networking) capabilities, allowing the Viking UGV to act as a node in a self‐forming, self‐healing mesh network of unmanned vehicles and other systems. The vehicle will be able to send and relay video footage and other mission‐critical data over a flexible, robust network that can expand over significant ranges.

The SOLO8 SDR‐H is a compact unit that can also act as a MANET IP Mesh node, as well as a point‐to-point (P2P) CODFM transmitter. P2P CODFM capability is essential for transmitting critical data with very low latency in challenging RF environments, for applications such as urban search and rescue and explosive ordnance disposal.

Three prototype Viking UGVs have been supplied to Dstl, and trials are being conducted in collaboration with the Combat Service Support Training and Development Unit (CSS TDU) based in Aldershot, UK. Dstl is aiming to gain understanding of the potential and limitations of the unmanned platform with an eye to further acquisition, as well as to develop deeper knowledge for the British Army’s future employment of more advanced autonomous vehicles.

With state‐of‐the‐art AI‐based autonomous capabilities and the ability to navigate even in GPS denied environments, the multi‐role unmanned platform can undertake missions such as battlefield support, ISTAR (intelligence, surveillance, target acquisition, and reconnaissance) and counter‐IED tasks, in addition to autonomous resupply.

DTC’s VP of International Sales, Nigel Lee, commented: “We are indeed excited to be supporting MIRA for this key UK MOD Robotic & Autonomous Systems (RAS) programme. This builds upon our previous supply of secure, MANET Mesh data radios to other UGV platform manufacturers for the UK MOD’s Robotic Platoon Vehicle (RPV), as well as supporting UxV platform manufacturers with their radios in the air and maritime domains for UAVs/drones and USVs respectively. DTC is leading the way in encrypted, networked, military mesh data communications in the UK; enabling Full Motion Video (FMV), Telemetry Control Data, and Positional Data for ‘On-the-Move’ applications.”