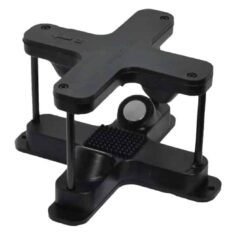 Anemoment, a developer of compact ultrasonic anemometers for unmanned aerial vehicles (UAVs) and other platforms, has released the following article explaining how its TriSonica Mini wind and weather sensor has been used to conduct atmospheric microclimate research on board a tethered balloon.

Tethered balloons, or tethered air blimps (TAB), have been used for atmospheric research studies since at least the 1940s, with some believing that their use goes well beyond that date. Regardless, balloons served as the research platform of choice for Dr. Amir A. Aliabadi, Ph.D. and his engineering students at the University of Guelph, as they recently conducted microclimate atmospheric measurements over the complex terrain of a Canadian mining field where fixed-wing or multi-rotor UAVs could not operate for safety reasons.

While the choice of a tethered balloon might seem primitive by today’s standards, the decision to use a tethered balloon in complex terrains such as mines and tailings ponds was based on a number of factors: ability to easily obtain permission to operate the balloon, and the extended flight duration balloons offer since they require no propulsion power.

“Tethered balloons are viewed as structures here in Canada; they’re not even considered airborne devices since they are connected to the ground,” says Dr. Aliabadi, Assistant Professor, Environmental Engineering, University of Guelph. “As such, we are not required to obtain flight permits or pilot licenses to launch a tethered balloon. We simply inform local authorities, such as Nav Canada (private) and Transport Canada (public), in order to obtain their approval to fly. They usually provide approval fairly quickly, making this approach very attractive for us to get a tethered balloon up and running in complex environments.”

The University’s balloon research was a component of three larger projects involving modeling of atmospheric environments from an air pollution and climate perspective, and proved to be an effective tool for profiling surface layer statistics of the first 200 meters of the atmosphere. These micrometeorological measurements benefited through the use of the tethered balloons since they were able to stay in a fixed position for a prolonged period of time to measure the wind reliably.

“Theoretically speaking, you should be measuring for at least half an hour to an hour at a time to truly be accurate,” Aliabadi states. “Our balloons just lift off and ascend and descend slowly, collecting hours of data, which is what you need to do to perform a proper long-term assessment of boundary layer physics, including the measurement of turbulence statistics with low systematic and random errors.”

The vertical structure of the atmospheric boundary layer (ABL) in an orographically complex terrain, such as a mine, proved to be challenging. Aliabadi and his team relied on an advanced sensor payload that measured components of wind velocity vector, temperature, relative humidity, pressure, and barometric pressure over the first few tens of meters of the ABL.

Mounted on the gondola of the TAB was an ultrasonic anemometer, the TriSonica Mini Wind & Weather Sensor, manufactured by Anemoment, LLC. The TriSonica Mini is engineered for applications that require a miniature, lightweight, and low-velocity anemometer. With its measurement path length of 35 mm and weighing a mere 50 g, the TriSonica Mini was well suited for use with the TAB system.

“While accuracy of measurements and weight were key factors in selecting the TriSonica Mini, the key element was the sensor’s price,” clarifies Aliabadi. “Competing ultrasonic anemometers can cost as much as $10,000 Canadian. The TriSonica Mini was a fraction of that cost and thus made the decision an easy one for us.”

The anemometer was also equipped with a compass and tilt sensor. With its low power consumption (only 30 mA at 12 V) the TriSonica Mini can record data for hours on a single battery charge — a critical benefit given the team’s desire for extended flights. In addition to capturing wind profiles, Anemoment’s 3D anemometer accurately measured pressure and temperature. Aliabadi commented on the importance of that functionality.

“Those two measurements give you a very accurate elevation and we used thermodynamics, pressure and temperature to determine the elevation of the sensor. We were able to do that within a meter, which was pretty amazing. If we had to use satellite data for elevation it is much less accurate. The TriSonica Mini did a very good job. It also allowed us to measure the stability of the atmosphere, thermal stability, heat flux, and so on.”

In their resulting paper (A Tethered Air Blimp for Observing the Microclimate Over a Complex Terrain) published by Geoscientific Instrumentation Methods and Data Systems, they reported: “TAB revealed the vertical structure of the atmosphere near the surface for most meteorological variables. The highest turbulence kinetic energies occurred in the lowest 100 m above the surface, albeit for small fluctuation timescales and length scales probed. Experiments provided evidence for the variation of thermal stability and wind speed as a function of diurnal time. The atmosphere spent a considerable amount of time under near-neutral and stable conditions, with implications on atmospheric diffusion coefficient and emission fluxes of atmospheric constituents released near the surface. The experiments specifically observed differences in the microclimate in the mine pit in comparison to that near the tailings pond. The overall pattern of diurnal variation was found to be similar for both the mine and the tailings pond, but subtle meteorological differences were observed. The mean wind speed, turbulence kinetic energy, and friction velocity were comparatively lower in the mine than near the tailings pond under thermally stable conditions, suggesting that the mine boundary layer may have been isolated from the boundary layer above grade. In addition, more positive vertical kinematic sensible heat flux and potential temperature variance were observed in the mine in various diurnal times in comparison to the areas near the tailings pond. This was likely due to terrain complexity and anthropogenic activities in the mine.”

In summary, Aliabadi wrote: “Overall, TAB offers a simple and cost-effective platform for microclimate measurements within the atmospheric surface layer. The light high-frequency weather sensor on board enables measurement of mean and turbulence statistics of the atmospheric meteorological variables. This configuration allows a wide spatiotemporal coverage compared to fixed flux towers. TAB can potentially provide meteorological data as boundary conditions or validation datasets for developing high-resolution computational fluid dynamics and other mesoscale models that attempt simulating meteorological processes and emission fluxes from large complex terrains of mining and other similar facilities.”

All of this resulting from research conducted from a tethered air blimp. At a time when many are looking for ways to simplify the complex, Aliabadi and his students may have found the answer.