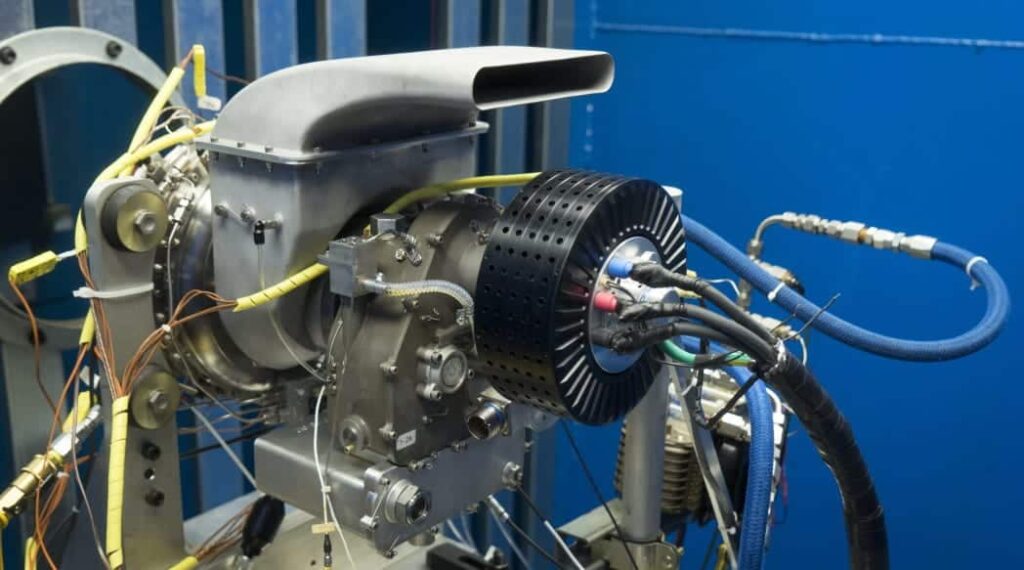 UAV Turbines, Inc. (UAVT), a developer of microturbine technology for unmanned aerial vehicles (UAVs), has announced that it successfully demonstrated its Monarch Hybrid Range Extender (HREX), a microturbine-powered generator technology that extends the operational range of electrically-powered medium-sized UAVs. Benefiting from the proven reliability of a gas turbine system, the hybrid system can extend the endurance of a wide variety of electrically powered UAVs.

The HREX engine extracts energy from the fuel, using this to directly power the propulsion motor. Any excess energy is used to recharge the system battery. Although some energy is lost during the extraction process, the net weight of the UAV decreases as fuel is used up, providing a tradeoff that can be fine-tuned to optimise performance, providing greater flexibility and increased range not possible with single-power-source systems.

UAVT set up a test system for HREX based on a Monarch 5 turboprop engine that was recently used to power a Group 3 TigerShark UAV. The Monarch 5 was converted to a turboshaft engine and used to power a standard COTS generator, the output of which is used to power an electrical motor driving a propeller.

Kirk Warshaw, CEO of UAV Turbines, commented: “It is well-documented that the range of battery-powered electrical air vehicles is sharply restricted by the relatively low power density of currently available batteries. Simply adding more batteries will result in the aircraft becoming too heavy to fly with a practical payload. The solution is a hybrid system that will power the aircraft in flight with battery power providing a boost during critical stages such as take-off, hover, and landing. These capabilities are critical for meaningful real-world missions, like a payload weighing more than 10 pounds that needs to be delivered more than 5 miles away. UAVT’s Monarch microturbine HREX technology provides this important new capability.”

Fred Frigerio, Senior VP of Engineering at UAV Turbines, said: “If you’re flying more than about half an hour, you probably need a range extender. The first step to extending flight is to add a small, efficient turbogenerator to the power mix. Let each power component do what it does best; batteries can release power at a very high rate so they are great for the burst of power needed during take-off, hover, and landing, while the turbine performs best when providing steady power for longer durations of operation. Importantly, the energy density of liquid fuel, for example jet fuel, is vastly greater than that of available batteries. A common rule of thumb is that liquid fuel contains at least 50x as much energy per weight as batteries. The battery is your sprinter, full of explosive power, while the turbogenerator is your marathoner, lean and efficient. The absolute gain in flight distance will be dependent upon numerous factors, but there is no doubt that there is a significant need for a reliable range extender application.”

The video below shows the HREX system in operation, demonstrating its flexibility with major elements connected by cables that can be configured to fit most Group 3 and 4 UAV airframes. A production system would be lighter, hardened for aerospace environments, and optimized for specific military and commercial applications and missions. According to UAVT, increases in flight time will be at least 2 to 3x greater than a UAV powered solely by batteries, if the target UAV has been designed from the ground up to make use of the UAVT range extender.

Find manufacturers of engines and propulsion systems for UAVs >>