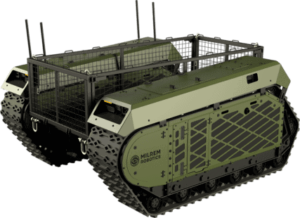 According to Kuldar Väärsi, CEO of Milrem Robotics “The most common question about THeMIS size class unmanned ground vehicles is how do you get them to where you need to use them. We have tackled this question during development of the newest – fifth generation THeMIS – and added a number of options: towing, hauling, following a convoy autonomously and now airlifting.”

The THeMIS which is a multipurpose tracked UGV, can carry a payload of up to 1200kg, move 25 km/h and pull equipment with a force of 21 000 N. It is a popular choice for a variety of payload integrations and among other things can be equipped with:

Working with industry partners such as Kongsberg, FN Herstal, MBDA and ST Engineering, the THeMIS has already been integrated with a wide variety of different systems.

In addition, Milrem Robotics is working on enhancing the vehicle with autonomous functions including point-to-point navigation, obstacle detection and avoidance. Autonomous functions development is focused on mobility alone, not on weapon systems deployment.

The THeMIS will be exhibited at various stands at DSEI London this September 10th – 13th.