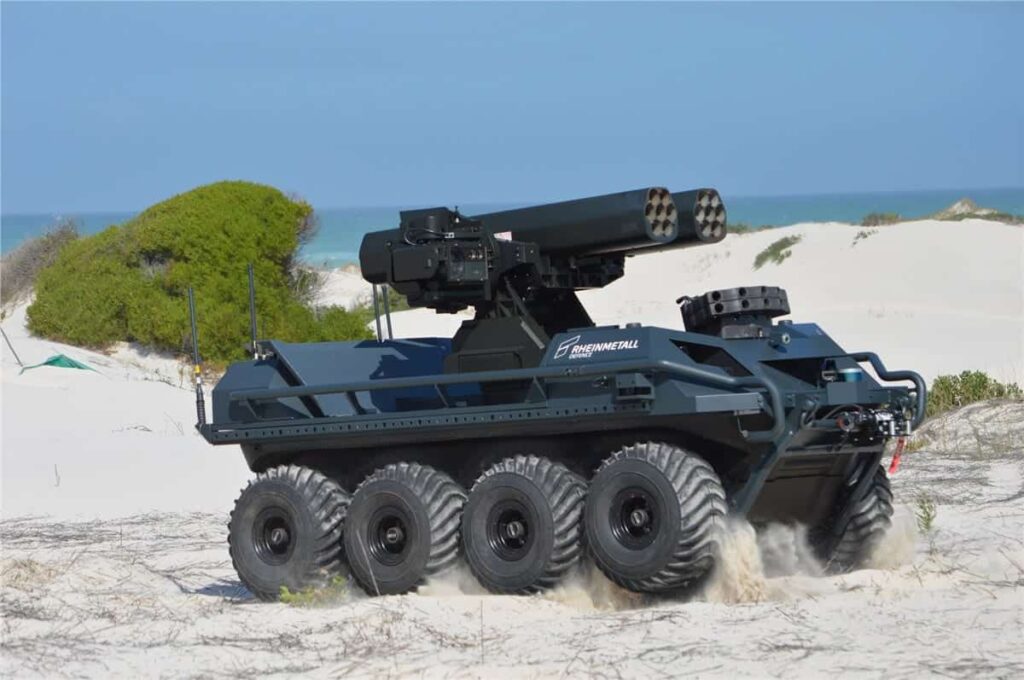 Rheinmetall has announced that its new Mission Master – Protection unmanned ground vehicle (UGV) was unveiled at Ammunition Capability Demonstration 2019 (ACD2019), one of the world’s biggest live-fire demonstrations. Delegations from 53 countries attended the demonstration, which took place at the Overberg Test Range outside Arniston in South Africa.

Armed with the Rheinmetall Fieldranger Multi weapon station equipped with 70mm rocket launchers from Thales, the newly developed UGV fired a salvo of 14 rockets, delivering 60 kg of explosives in 1.6 seconds. “We are probably the first to use an air-to-ground system in a ground-to-ground role, definitely the first to do it from an UGV”, said Alain Tremblay, Rheinmetall Canada’s vice-president for business development.

After a month of conducting tests and live-fire trials in South Africa with the Mission Master –Protection’s new payload, Rheinmetall was able to field a perfectly mounted and stabilized weapon system at the demo. This achievement was made possible in part by involving an important partner. “Thales demonstrated a very high level of professionalism. Our technical collaboration helped us take a major step forward”, declared Mr Tremblay. With the qualification process complete, the combination of the Fieldranger Multi and the 70mm rocket launcher meets the full array of military standards and is now ready to be installed on other types of platforms and armoured vehicles. The Mission Master – Protection can also be mounted with 50mm weapon systems, .50 cal. machine guns and 40mm grenade launchers.

The demonstration carried out at the Overberg Test Range used a remotely controlled system operating in a fully digitised scenario, with fire controlled via the Rheinmetall Argus soldier system. Rheinmetall and Thales both stressed the need for a man-in-the-loop configuration, meaning that the operator has full control of the weapon system, from target acquisition through to final fire authorization.

Just as armed unmanned aircraft systems (UAS) have had a revolutionary impact in air warfare, all indications suggest that the number of armed UGVs will continue to grow quickly in ground operations. With field tests taking place around the world, including the deployment in Syria of Russia’s URAN-9 weaponized UGV, numerous nations have come to appreciate the potential of armed UGVs.

As demonstrated at ACD2019 with the Mission Master-Protection, a weaponized UGV opens up a wide range of new possibilities. While minimizing the risk to friendly forces, it substantially boosts the combat power of dismounted troops by providing close fire support. It can also conduct autonomous high-risk military tasks in today’s complex battlespace.

Building on a robust base platform, the Mission Master supports troops during dangerous missions, including in difficult terrain and hostile weather conditions. Using a variety of modular, easy-to-install payloads, it not only provides protection on the battlefield, but can also conduct a multitude of other tasks, including logistic transport, surveillance, rescue, fire suppression, CBRN detection as well as serving as a radio relay station.

Rheinmetall also unveiled its Mission Master-Rescue, a new variant capable of autonomously evacuating casualties over long distances. Fitted with two basket stretchers with sliding elements, the rescue UGV also features head and foot immobilizers, oxygen masks and bottles, a defibrillator, and a hot/cold box – a suite of equipment that would be impossible to carry on foot.