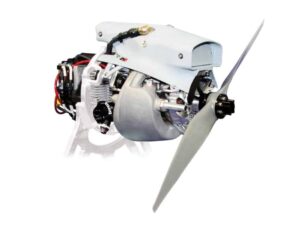 Northwest UAV has announced that its NW-44 Heavy-Fuel Engine for unmanned aerial vehicles has reached a milestone of over 1500 combat flights. The Commercial Off-The-Shelf (COTS) propulsion solution is designed for small UAVs in both the defense and commercial sectors.

“We’re proud of this milestone for the NW-44 Heavy-Fuel Engine,” President and Owner of NWUAV, Chris Harris says of the NW-44 Engine logging over 1500 flights. “But we aren’t surprised. The NW-44 offers something unique in the small unmanned aircraft systems market – consistency. Most systems are based on hobby engines which are inconsistent from engine to engine, a throw-away after its short life. One NW-44 engine can log a thousand or more flight hours and multiple overhauls. They’re designed to allow simple routine maintenance, and periodic overhauls much like a jet engine.”

Northwest UAV’s Chief Technical Officer Jeff Ratcliffe is convinced that the NW-44 engine’s unique design for overhaul isn’t the only reason it continues to be a popular propulsion choice.

“The NW-44 is a very adaptable engine,” Ratcliffe explains. “It is built to support the 55 lb commercial market and Military Tier II UAV needs, which makes it the go-to engine for a wide variety of customers. Its adaptability is yet another reason it’s a very cost-effective solution. Rather than designing and building their own purpose-built engine, our customers can quickly, easily and affordably take advantage of the NW-44 Engine’s standard professional aviation features to fit their needs.”

For customers who fall outside of the Tier II weight range, NWUAV is developing and testing a series of engines that borrow the design elements of the NW-44 Engine and offer similar capabilities for larger vehicles. Borrowing design elements from the NW-44 greatly expedites the development process and is proving successful in testing.