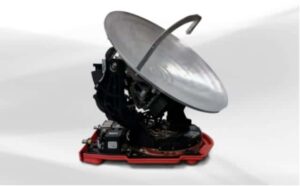 The compact terminal delivers the industry’s highest data rates for an 18 inch antenna, providing the highest forward link capacity (to the aircraft) and highest return link capacity (from the aircraft) to perform high-bandwidth applications such as advanced video streaming services.

Find suppliers of SATCOM solutions and antennas for UAVs >

The terminal is made up of a two-axis steerable, two-way Ka-band antenna with an integrated antenna control unit (ACU), an antenna power supply unit and a modem. The GAT-5518’s antenna can be tail, fuselage or hatch-mounted.