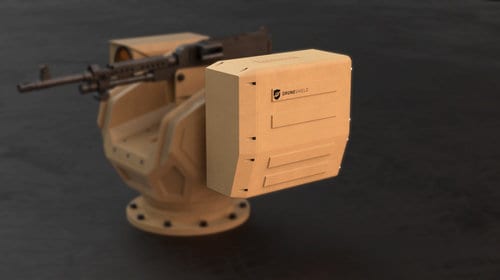 DroneShield has announced the launch of DroneCannon RW, a counterdrone jammer which is designed for use on remote weapon stations.

Historically, DroneShield has focused on “soft kill” counterdrone solutions, which means that DroneShield’s products interdict drones through technological interference rather than physical kinetic impact. Although military users around the world recognise that “soft kill” drone defences are particularly effective, many already have in service “hard kill” systems that are not drone defence-focused (a “hard kill” system is a conventional kinetic weapon that affects its target by physical impact, through bullets and other projectiles). User feedback suggests that many global militaries are seeking “soft kill” solutions that integrate with their existing “hard kill” systems.

The new DroneCannon RW is a lightweight “soft kill” system designed to integrate with unmanned gun systems as part of a combined “hard kill/soft kill” layered system. It is system-agnostic and can be integrated with any third party remote weapon station, thus allowing manufacturers of unmanned weapons systems to add a “soft kill” option to their existing products, which may already be in service. The system is available for use either as a stand-alone, or a vehicle-mounted product.

Oleg Vornik, DroneShield’s CEO commented: “The release of DroneCannon RW results in two important milestones for DroneShield. Firstly, DroneShield is now one of the very few defence and security companies enabling its customers to utilise a combination of soft kill and hard kill counterdrone solutions, with an optional detection add-on through other DroneShield products, all seamlessesly integrated into one system. Secondly, this system continues our entry into the on-vehicle counterdrone segment, following our recent Rapid ScoutTM partnership, something that is technologically challenging and unique in the market.”