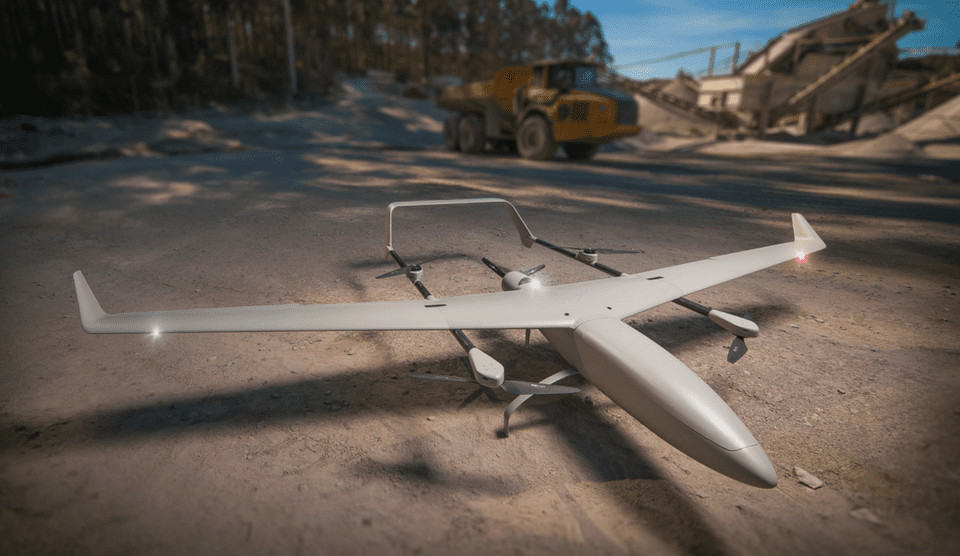 ALTI UAS have released the article below outlining reasons to choose a long-endurance, fixed-wing UAV (unmanned aerial vehicle) for an operation. The factors under consideration include endurance, payload capacity and VTOL requirements.

Multi-rotor drones are a lot slower than fixed-wing drones, which travel at a high speed, so getting a job done quickly isn’t usually an option, especially if you need to cover a large area of land. Whether the drone is being used for construction, maintenance, agriculture or public safety, having the drone in the air for longer periods of time saves a lot of time as opposed to bringing it down every half an hour. Fixed-wing drones can fly up to 10x longer than multi-rotor drones. Most of these drones can easily fly a 250-1000+ acre plot in a single flight. When it comes to land surveying, a whole survey can usually be completed in just one flight, saving large amounts of time.

Selecting a fixed-wing VTOL (vertical take-off and landing) aircraft will save both time and money, as setting up catapult launch equipment is time-consuming, and the cost of this additional equipment along with the heavy duty landing gear are factors to be considered.

The ALTI Transition, a fixed-wing VTOL aircraft, offers an endurance of up to 12 hours in the air, with a fixed-wing set up to allow for greater flying time. A larger UAS in the family, the ALTI Reach, offers 24+ hours of endurance.

Long-endurance drones can fly at a higher altitude than other drones. Gathering scientific data for surveys and agriculture is easier because of the vast land expanses and geography that can be covered. Collecting data over a large area of land is more efficient than using a multi-rotor drone that can’t cover as much land in one flight. Most endurance drones can be controlled up to 400 miles.

A VTOL fixed-wing UAV does not require additional landing gear, and is therefore capable of taking a larger payload capacity, along with a safe landing and undamaged payload.

The ALTI Transition, a fixed-wing VTOL UAV, has a maximum safe payload of up to 1.5kg. For long endurance flights of 8+ hours, a payload of under 1kg is ideal. The fuel tank capacity is 3L, which equates to just over 2kg of fuel. Lower fuel can be used if a larger payload is required, but this will obviously result in shorter flight times.

When it comes to weather conditions, fixed-wing UAVs are able to handle far more than multi-rotors. Severe wind drains multi-rotor batteries quickly and owners often need to have a back-up battery to finish a job. A multi-rotor battery lasts approximately 15-20 minutes, while fixed-wing batteries can exceed 45 minutes, meaning they can cover many kilometres once in the air.

The ALTI Transition, a fixed-wing VTOL UAV, can achieve endurance up to 12 hours, in real world conditions at sea level when fully fuelled with no payload.

Maintenance is also something to think about when comparing fixed-wing and multi-rotor UAVs. Fixed-wing drones have a much simpler structure and are less complicated to maintain and repair. Multi-rotor drones have a more complex mechanical and electronic structure, which means that repairs will take longer and cost a lot more.

A standard fixed-wing drone, which requires a catapult to launch, will continue to take on damage to the aircraft and payload with the impact of each landing. The cost of maintenance per flight is significant when compared to a fixed-wing VTOL UAV like the ALTI Transition for which maintenance is relatively low due to smooth take-off and landing.