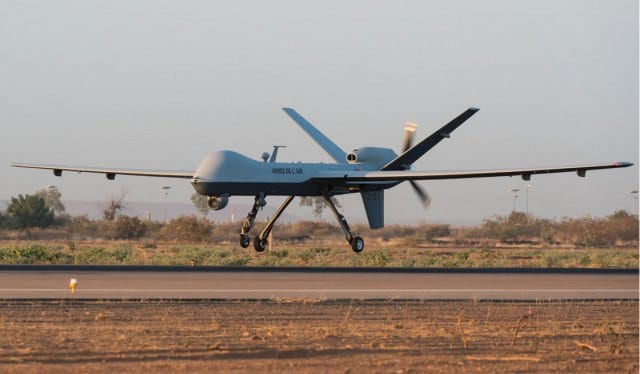 The French Air Force benefits from permanent corridor systems connecting all military-dedicated airspace, which enabled the RPA to access restricted areas created over Paris for the Bastille Day celebrations. MQ-9 Reaper flew safely over a populated area of seven million people, among numerous other military aircraft participating in the airborne parade

“We are pleased that MQ-9 Reaper flew over this important national event in France,” said GA-ASI CEO Linden Blue. “Using its ISR [Intelligence, Surveillance, and Reconnaissance] sensors suite, the MQ-9 enhanced the safety of the French public who attended Bastille Day activities. As a company, we are very proud of the role we play in France’s national security and its contribution to the NATO Alliance.”

In 2017 France received its second MQ-9 Reaper system, consisting of three aircraft and a ground control station (GCS). Two French MQ-9’s are based in Cognac Châteaubernard Air Base, where they perform daily training or ISR support to interministerial missions in French airspace. The 1/33 Belfort RPA squadron currently operates six Reaper RPA to provide intelligence and support capabilities to Operation Barkhane and the Special Forces.

Enhancing Safety & Efficiency for the Utilities Industry with Drones

AESA Maritime Radar to be Integrated on MQ-9B SeaGuardian UAS

VTOL UAV for Civil and Military Applications
View Profile Visit Website
Send Inquiry To receive further information or request a quote, complete your details and a representative from will be in touch.