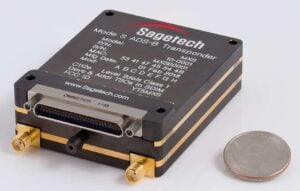 The NASA Unmanned Aircraft Systems Integration in the National Airspace System Project and its government and industry partners have been conducting research to reduce technical barriers to routine operation of unmanned aircraft in the national airspace system. Flight tests conducted with NASA’s Ikhana UAS beginning in 2014 are being used to develop and validate minimum operational performance standards for large (group 5) UAVs to detect and avoid other aircraft. An upcoming project phase will see NASA extending its DAA research to smaller UAVs, conducting flight tests with its medium-class (group 3) SIERRA-B (Sensor Integrated Environmental Remote Research Aircraft).

ADS-B transmits GPS position data to other aircraft nearby for use by operators and aircraft control algorithms to maintain safe separation distances. Sagetech’s transponder with integral ADS-B enables NASA’s system to electronically “see” nearby aircraft and maneuver to avoid them. Similarly, it enables the SIERRA-B to “be seen” by those same aircraft.

“Sagetech is pleased NASA chose its transponders for its research into safe, routine operation of UAVs together with manned aircraft,” says Kelvin Scribner, Sagetech’s CEO. “For over 10 years Sagetech’s miniature surveillance equipment has enabled efficient military operations with small UAVs that would have been impossible otherwise.”

UAV operations are projected to increase sharply in civil airspace, especially once rules for accessing that airspace are in place. The SIERRA-B technology demonstration signifies NASA’s commitment to push the boundaries of what’s possible on UAVs, even small ones, and lays the groundwork for future FAA rule-making.

Small UAVs are difficult to see, which makes visual detection unreliable. Primary radars struggle to detect reflected energy from the small radar cross-section of these tiny airplanes. Transponder equipage overcomes these obstacles by enabling UAVs to “squawk” replies to secondary radar interrogations. ADS-B equipage goes a step further by periodically “squittering” position and other aircraft data automatically. Air traffic controllers depend on transponders and ADS-B to maintain safe separation between these aircraft. With Sagetech transponders, UAVs as small as 20 pounds can share airspace safely and routinely with other manned and unmanned aircraft.