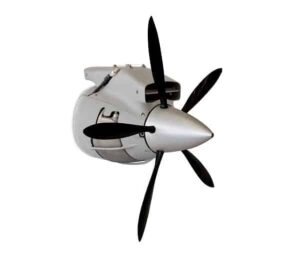 Northwest UAV (NWUAV), a developer of propulsion systems for unmanned aerial vehicles, has announced the completion of over 100 hours of rigorous flight testing with the NW-44 engine, setting a new altitude record for small normally aspirated unmanned propulsion systems in the process.

“The engine performed very well and exceeded expectations on every metric, especially on performance and fuel economy.” said NWUAV President and Owner Chris Harris. “The aircraft flew a typical mission profile (twelve hours of operation) consuming less than five liters of heavy fuel. A lot of effort went into eliminating weight and parasitic drag in the design, which pays dividends for our customers in mission endurance.”

The multi-fuel NW-44 is a turn-key, modular propulsion system designed specifically for small unmanned aircraft. This flight testing was the culmination of four years of design, development, and thousands of hours of ground testing, and resulted in the NW-44 passing the FAA’s stringent FAR 33 endurance test. The same engine then continued testing beyond 500 hours before final tear down and evaluation.

Tests conducted used both gasoline and jet fuels at extreme operational temperatures (-15c to 45c) with elevations exceeding 23,000 feet. The system showed excellent efficiency using only 290-330 grams per hour of fuel (the equivalent of 670 MPG or 285km/L) all while providing up to 250 watts of electrical power for avionics, flight controls and payloads.

Chief Technical Officer Jeff Ratcliffe states: “The NW-44 is the first commercially available EAR 99 export approved propulsion system. This system is designed from the ground up with the intent to achieve FAA certification and sets new standards for the UAV industry.”