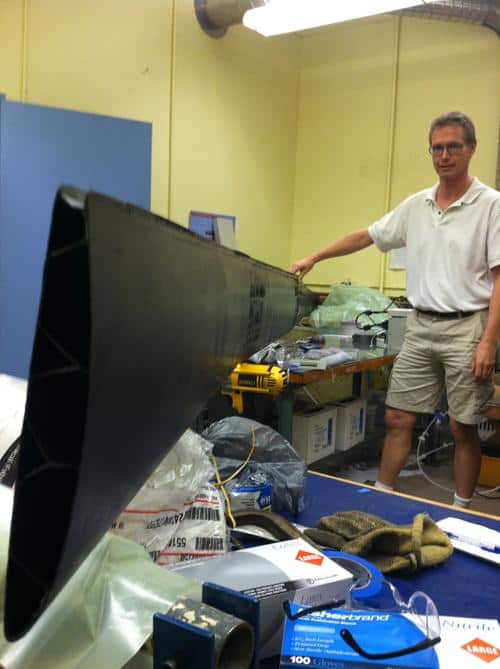 Lehigh University reports that one of its engineers has developed a carbon fiber composite wing for use on an unmanned aircraft being designed for high-altitude perpetual flight.

The first uniquely designed carbon fiber wing has emerged from Lehigh’s Composites Lab. The 6.5m/21.3-ft wing was made in a single molding process, complete with wing planks, spar caps to fortify the wings, six internal webs to carry shear loads and a trailing edge ready to accommodate wing flaps.

The wing is made for an unmanned aircraft designed to fly at high altitude and generate power from the jet stream and the sun. The long-term goal of the project, led by Lehigh mechanical engineer Joachim Grenestedt and computer scientist John Spletzer, is perpetual flight.

To keep an autonomous aircraft aloft for years at a time requires not just a source of power in the sky — in this case solar and wind — but a unique aircraft. It needs to have very low drag and long slender wings, as on manned gliders. But it also needs to be able to fly very fast. The wings must be stiff to avoid flutter and divergence (two phenomena of flight that become very important at high speeds), and strong to be able to perform hard, high-­speed turns. The present wing was designed to not fail before the aircraft sees 20G in the turns.

Grenestedt and Spletzer seem to have met that challenge with a carbon fiber wing built as a single piece. No nuts and bolts. No glue joints. No weak points. No trimming or fitting of parts. No complex alignment jigs. The entire wing is made from thin layers of carbon fiber (0.6 mm thick) configured into complex geometric shapes and placed layer by layer in molds digitally designed and machined at Lehigh. The resulting wing has stronger-than-steel performance.

The researchers use carbon fiber reinforced epoxy, similar to the material Grenestedt used to build the Numerette (www4.lehigh.edu/news/newsarticle.aspx? Channel=%2FChannels%2FNews%3A+2010&WorkflowItemID=7882a034-­‐9c9e-­‐4e74-­‐a24e-­‐6c0b643bc25a), said to be the largest craft yet constructed with a composite sandwich hull. Grenestedt and a team of students fabricated the prototype this month and are now testing whether it stands up to extreme forces. In the accompanying time-lapse video (www.youtube.com/watch? v=TMqKifRZGm4), students build the prototype in about two weeks.

The top wing skin is layered into the mold, followed by the placement of the internal webbing of carbon fibers, geometrically aligned by using flexible tubing and expanded polystyrene as placeholders to form the structure. Then the lower half of the wing skin is layered on top and the entire wing is cured in a 250°F/121°C oven, burning away the expanded polystyrene and tubing placeholders.

If successful, the final craft could alter the way humans launch satellite communications, monitor weather and conduct surveillance. The multi-year project is funded by the National Science Foundation and Lehigh University.