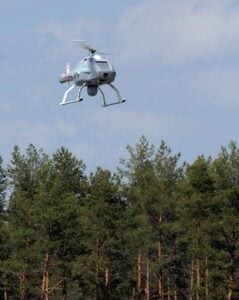 Flight tests have been recently carried out with a heavy fuel powered version of Saab’s Skeldar VTOL UAV.

The heavy fuel powered version of Skeldar is part of the baseline configuration of the helicopter, which already includes a number of robust and highly adaptable system solutions.

The heavy fuel powered version of Skeldar gives great benefits. Above all, since the existing infrastructure and logistics with regard to fuel for manned aircraft can be used. It also means improved handling in terms of safety when Skeldar is used for marine purposes.

In addition to the heavy fuel version of Skeldar, other functionality is currently being tested in order to verify Skeldar’s performance. Flights are being conducted in Sweden and Germany. In parallel to this, further development of the ILS concept is underway as well as the functional and configurational development of ground stations.

The Mobile Ground Control Station, which can be part of a moving convoy, enables new convoy protection features where the Skeldar helicopter can be tethered to and automatically follow a moving convoy.