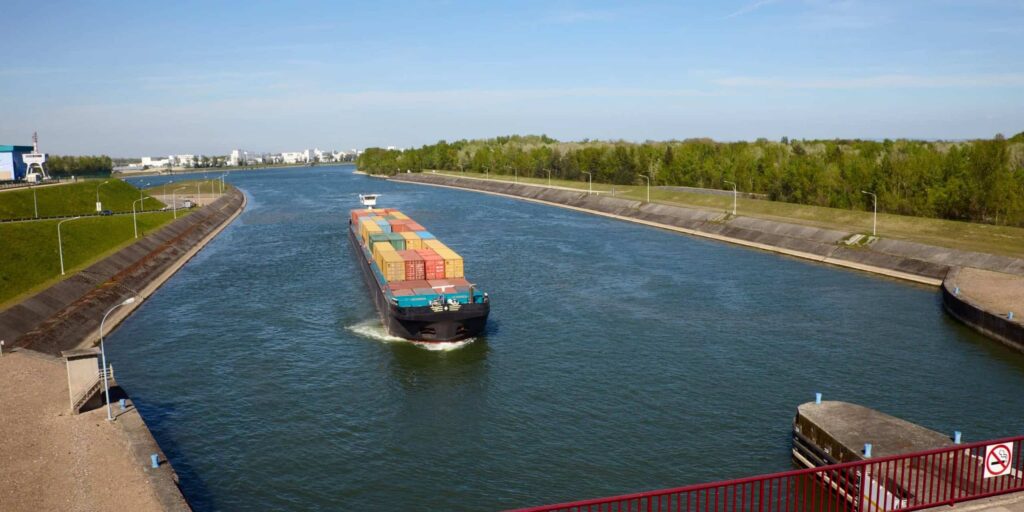 In the following article, Sea Machines explains how marine highways systems and autonomous vessels could be the key to developing reliable, high-capacity, and sustainable supply chains.

As a result of the pandemic and other significant events, nations around the world are now grappling with supply chain disruptions, economic insecurities, labor shortages, rising environmental pollution and persistent safety concerns. Each of these challenges is disastrous on their own, but collectively they amount to a crisis. Resolving these issues will certainly require a multi-prong approach, but a critical part of the puzzle may lie in our oceans and inland waterways.

While Europe and Asia have been using robust marine highway networks for decades, the United States and other leading economies are playing catch-up in capitalizing on underutilized shipping routes. One approach includes using short-sea shipping, or coastal shipping, which leverages smaller vessels to carry cargo from larger ports to smaller ones. As demonstrated in Europe, Asia and even niche markets like Alaska (which depends on healthy marine highways to supply rural communities), using a combination of large ships and smaller cargo vessels to transport cargo promotes reliable, high-capacity supply chains in an environmentally friendly, expeditious, safe and secure way.

According to the U.S. Department of Transportation (USDOT)’s Maritime Administration (MARAD), this solution starts with shippers shifting freight from trucks to vessels. Doing so will alleviate landside congestion and decrease the wear and tear on overused roads and bridges. Shifting hazardous cargo from trucks to ships away from heavily populated areas also increases public safety, as does reducing the number of large trucks on shared roadways.

Ships are also significantly more efficient than trucks. A modern ship emits an average of 10 to 40g of CO2 per kilometer, while a truck produces between 60 to 150g for the same distance. This number is even more compelling when you consider the capacity differences. American Feeder Lines reported: “A single ship on a marine highway could replace nearly 750 trucks on the already congested roads.”

MARAD similarly stated: “[Use of a marine highway system would] improve environmental sustainability of the U.S. transportation system by using less energy and reducing air emissions (such as greenhouse gases) per passenger or ton-mile of freight moved.”

A nation’s investment in its marine highway system improves economic competitiveness by creating and sustaining jobs aboard vessels, in ports and in shipyards, and by adding new cost-effective freight and passenger transportation capacities.

As evidence of the forward momentum towards maritime highways systems, U.S. President Biden recently passed a new Infrastructure Deal that included an unprecedented $17B to improve America’s coastal and inland ports and waterways, and land ports of entry along borders. The single largest federal investment in marine transportation in U.S. history, the deal is designed to “deliver near-term assistance and make long-term investments to strengthen supply chain resiliency,” “create good-paying jobs” and help the nation compete on a global stage.

It’s clear that marine highway systems contribute towards a nation’s growth and security, and that leading countries are prioritizing them now. 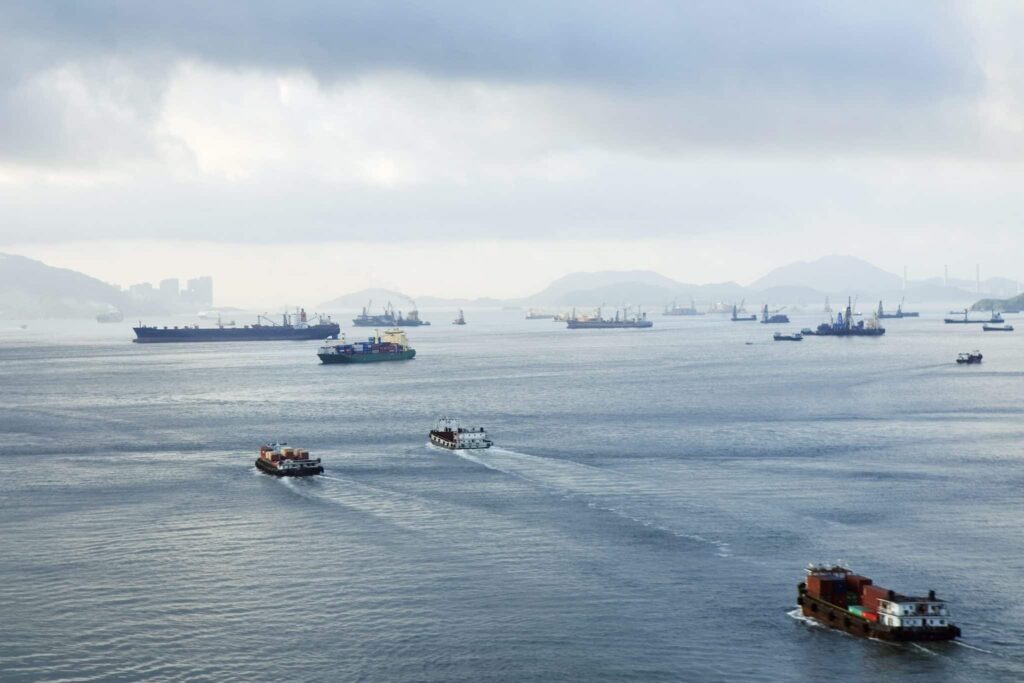 At the same time that countries like the U.S. are pouring funds into ports and marine highways, investors in Europe are injecting capital into the Blue Economy, the sector spearheading the sustainable use of ocean resources for economic growth, improved livelihoods and jobs, while preserving the health of the ocean ecosystem. While many of these capital investments will support “green” environmental solutions and the digitization of outdated systems processes, there is a significant amount of money being funnelled into technologies that automate marine operations.

It’s proven that automation across all industries improves operational performance, profits, efficiency and safety. When applied to the marine and maritime industry, these benefits translate to greater operational output and schedule integrity, and reduced fuel consumption, with lower at-sea risk, furthering the benefits of investing in marine highways and alleviating the problems plaguing logistics.

The next wave of technologies will include sensor fusion and enhanced situational awareness with the introduction of technologies like computer vision. Computer vision provides crews with a fuller understanding of the ship’s operating domain, including nearby traffic, obstructions and typically undetected objects by traditional sensors, by fusing data from conventional marine instruments. It gives crew the data they need to make informed decisions that can positively impact cargo schedules and operational costs.

“There are wide-ranging potential applications for Sea Machines’ products that can impact our industry, both commercially and in the government space. From safety to greatly improving efficiency of current ships and newbuilds, to gaining big savings through the reduction of fuel consumption,” said former Maritime Administrator Retired Rear Admiral Mark Buzby, who is also a member of Sea Machines’ Advisory Board. “Our industry is one of the last to get on board with automated technology. We’ve stayed in our ways, but we must now bring it in where it makes sense.”

“I am very excited to see leading-edge capabilities that can bring a higher level of safety, efficiency and resilience to the maritime sector,” added Director at Norwegian Cruise Line Holding Ltd. Rear Admiral Mary Landry, and fellow Sea Machines’ Advisory Board member. “We need more cutting-edge technologies and innovation to meet the demands that are here now and ahead of us. Just look at the criticality of the supply chain, the energy sector and various activities taking place in the maritime commons.”

Sea Machines at the Forefront

According to Maritime Executive, worldwide there are now more than 1,000 autonomous surface ships (MASS) operated by more than 53 organizations around the world. These vessels often work in partnership with manned vessels in diverse marine highway systems. The outlet reported: “Both Flemish and Dutch marine institutes are investing in inland autonomy programs in the hopes of reducing reliance on large-scale trucking. This effort will reduce the pressure on roads, ease traffic congestion, and minimize fossil fuel emissions… In the Netherlands, the City of Amsterdam and the Amsterdam Institute for Advanced Metropolitan Solutions are [working to produce] a fleet of autonomous vessels… Other cities, including Copenhagen, Paris, and Tokyo have expressed interest in the modular USV.”

With its rapidly growing fleet of test vessels, customers, innovation partners and dealers around the world, Sea Machines is contributing significantly towards this burgeoning industry trend. One recent example includes that of First Harvest Navigation, which in 2020 launched the first autonomous hybrid cargo vessel in the U.S. First Harvest Navigation is now using the technology for redundancy and flexibility for crew shifts, thanks to the SM300’s capability to autonomously command the vessel from a land-based control station. In addition to autonomous control and remote vessel monitoring tools, the SM300 system also features obstacle detection and collision avoidance technology for added operational safety. 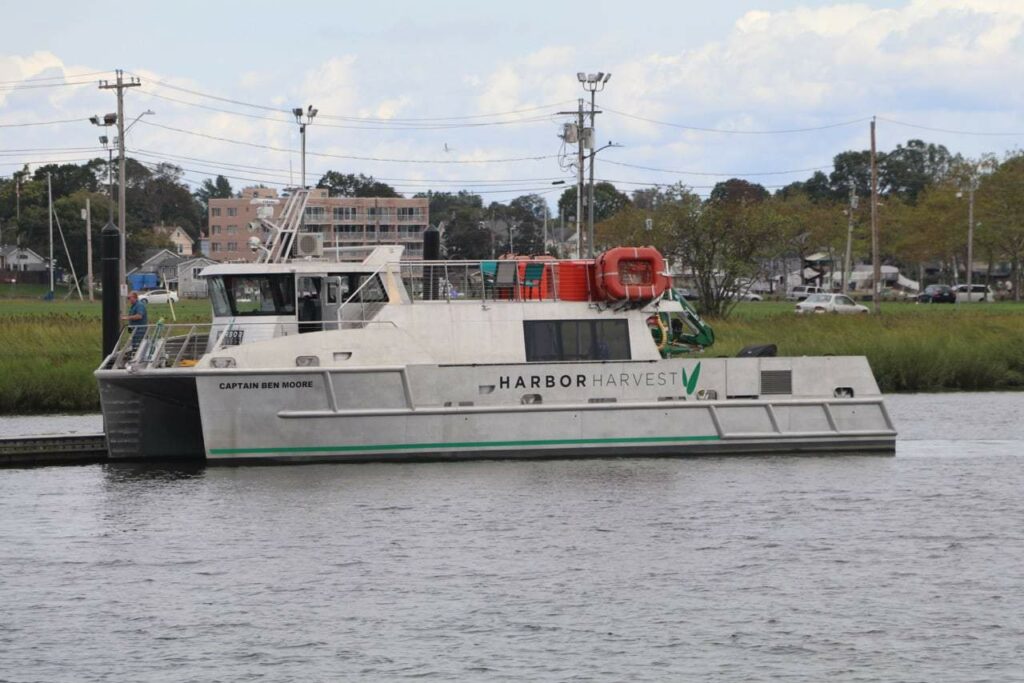 “Part of our transportation goals are to develop autonomous, hybrid catamarans to move farm products across Long Island Sound. The Sea Machines SM300 autonomous navigation system will help us achieve many of our goals because it enables shipping movements to be completed very reliably and efficiently in a seamless and sustainable delivery system,” said Bob Kunkel, president, First Harvest Navigation. “Shifting cargo from streets and highways also alleviates the growing congestion, lower emissions and re-establishes our waterways as a viable and cost-efficient alternative to land-based transport.”

In our congested world of terrestrial roads and highways, Sea Machines’ technology is reopening our water-world for ultra-optimized transport.

Our oceans are one of our most important assets, support our multi-national society with an international global highway of commerce and communication. There is a global race to build the technology that solves modern challenges head on, and Sea Machines is the leader in reimagining marine operations with connected self-driving autonomous systems. Contact us to learn more about how Sea Machines can help you maximize marine transportation with modern technology.