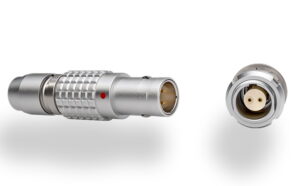 LEMO has expanded its portfolio of connectivity solutions with a new series of Single Pair Ethernet (SPE) connectors. The LEMO SPE 1000Base-T1 is designed to operate over a single twisted-pair copper cable, supporting an effective data rate of 1 Gb/sec in both directions simultaneously, and has been engineered to withstand challenging applications such as UAVs (unmanned aerial vehicles) and robotics.

As network requirements have changed over time, Ethernet has consistently improved in terms of speed, security, and quality. As a result, it has emerged as a standard for wired connectivity in many industries, including aerospace and defense. Following this development, LEMO has provided solutions over time that are compliant with the various ethernet protocols as they emerged. As a result, it has one of the most extensive portfolios of connectors for high-speed ethernet.

Selecting an SPE connector does not automatically guarantee compliance with this protocol and the related data transfer speed for the complete interconnect solution. The cables must at least comply with the same protocol, respect the maximum length given in the protocol, and be carefully assembled to the connector. The solution must also be fully tested. LEMO’s team of experts can provide assistance with compliant high-speed interconnect solutions.

Key features of the LEMO Single Pair Ethernet 1000BASE-T1 include: