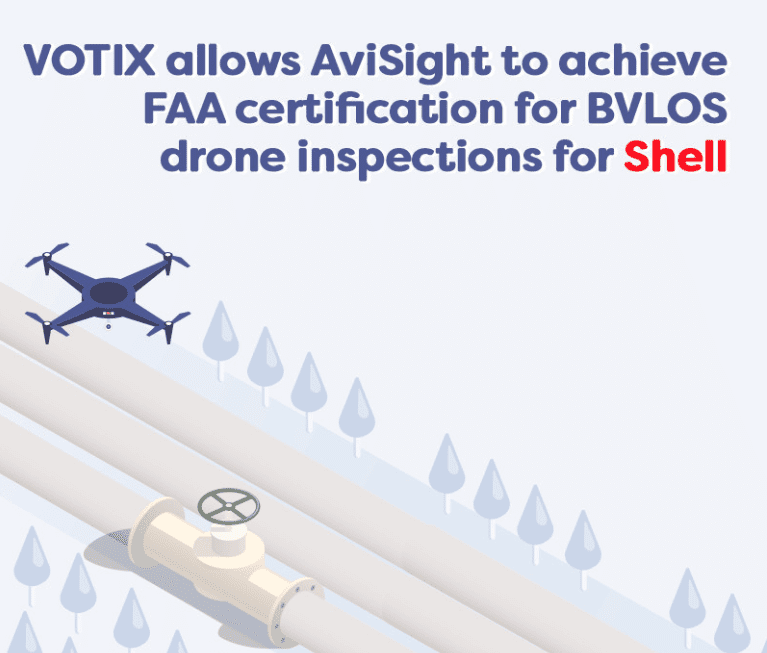 Drone automation, orchestration and remote operations software by VOTIX has been instrumental in AviSight achieving certification by the Federal Aviation Administration (FAA) for beyond visual line of sight (BVLOS) operations of drones for inspections at Shell USA, Inc.

VOTIX gateway is installed on board the drones and enables, via cellular connectivity, to fly the drones safely and securely over the internet with ultra-low latency from anywhere with full command and control and high-definition video streaming.

“VOTIX is disrupting drone operations, allowing any drone to be operated remotely through the cloud using cellular connectivity on the drone and in compliance with FAA regulations. VOTIX converts any drone into an automated platform capable of deploying drone programs at scale. VOTIX unlocks the full potential of drones,” said Ed Boucas, Founder and CEO of VOTIX.

“With VOTIX we have full control of the drone in real time over long distances and in difficult geographical conditions. With this capability, we can scale out our operations more efficiently than ever before, providing long range BVLOS support to customers all over the country, while live streaming data to key decisions makers anywhere on the planet; a gamechanger in UAS operations.” said Will O’Donnell, COO at AviSight.

“This is an important step in the future of commercial aerial patrol and surveillance” said Reggie Wycoff, Shell Aviation Manager. “This waiver allows the remotely piloted aircraft system operator to use an existing cell phone network to maintain command and control of the aircraft. This FAA approval will allow for greater automation and scale of our inspections, reducing time and cost.”