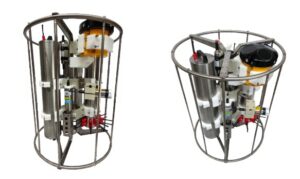 RTsys, in conjunction with Ifremer (the French National Institute for Ocean Science), has developed an underwater instrument module designed to take standardized scientific measurements for the study of marine environmental processes.

The module was developed for EMSO (European Multidisciplinary Seafloor and water column Observatory), a network of observatories in Italy, France, Ireland, Spain, Romania, Greece, United Kingdom, Portugal and Norway. The main objective of EMSO is to conduct studies concerning the impact of global warming on the oceans surrounding Europe. This objective includes the study of deepwater ecosystems, with particular interest in anthropogenic and climatic factors, as well as generating continuous scientific data on marine environmental processes related to the interaction between the geosphere, the biosphere and the hydrosphere.

The EGIM (EMSO Generic Instrument Module) is based around the COSTOF2, a deepwater datalogger that can operate at depths of up to 6000m and provides a unique operating and recording module for a wide range of sensors over a long period of time with total autonomy. EGIM has been designed to consistently and continuously measure environmental parameters in order to provide data on marine changes in Europe, and will soon be deployed by IPMA (Portuguese Institute for the Sea and the Atmosphere) off the southwest coast of Portugal.

EGIM provides a selection of referenced sensors that are fully synchronized with the COSTOF2, which supplies the necessary power required by each sensor. Previous research mission required each underwater observatory to use physicochemical sensors that were constrained by the use of several different data loggers, and to extract the data recovered from each sensor via proprietary software. With the COSTOF2, it is now possible to recover all the data fully synchronized by acoustic modem from the surface or by Wi-Fi. COSTOF2 can be operated on mooring lines, seabed stations and surface buoys. The data can be downloaded on a regular basis and made available to all project stakeholders.

In addition to the data logger function, EGIM can also trigger actions on events, such as activating certain sensors in parallel to a targeted value detection from another sensor.

The COSTOF2 is used on all IFREMER instrumented, non-wired and long-term test sites, in particular at EMSO Azores with two seabed stations (including one EGIM) connected by acoustic modem to a surface buoy. This site is also equipped with a COSTOF2 surface version which re-transmits its data to Earth via satellite.