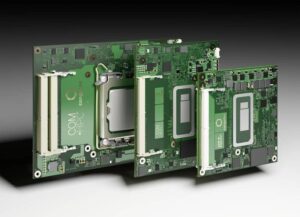 congatec has introduced a new range of COM-HPC and COM Express computer-on-modules based on 12th generation Intel Core mobile and desktop processors. The new modules, in COM-HPC Size A and Size C as well as COM Express Type 6 form factors, offer major performance gains and improvements for embedded and edge computing applications such as drones and robotics.

Offering up to 14 cores/20 threads on BGA and 16 cores/24 threads on desktop variants (LGA mounted), 12th Gen Intel Core processors provide a significant boost in multitasking and scalability levels. Next-gen IoT and edge applications benefit from up to 6 or 8 (BGA/LGA) optimized Performance-cores (P-cores) plus up to 8 low-power Efficient-cores (E-cores) and DDR5 memory support to accelerate multithreaded applications and execute background tasks more efficiently.

In addition, the mobile BGA processors, with up to 96 Execution Units of the integrated Intel Iris Xe GPU, have been estimated to deliver improvements of up to 129% in graphics performance, and can also process parallelized workloads faster, such as artificial intelligence (AI) algorithms, as compared to the 11th Gen Intel Core processors.

Optimized for highest embedded client performance, the graphics of the LGA processor-based modules deliver up to 94 % faster performance, and image classification inference performance has nearly tripled with up to 181% higher throughput. In addition, the modules offer massive bandwidth to connect discrete GPUs for maximum graphics and GPGPU based AI performance. Compared to the BGA versions, these and all other peripherals benefit from doubled lane speed as they come with ultra-fast PCIe 5.0 interface technology in addition to PCIe 4.0 off the processor. Furthermore, the desktop chipsets provide up to 8x PCIe 3.0 lanes for additional connectivity and the mobile BGA variants also offer up to 16x PCIe 4.0 lanes off the CPU and up to 8 PCIe 3.0 lanes off the chipset.

Christian Eder, Director of Marketing at congatec, commented: “Leveraging Intel’s innovative performance hybrid architecture with impressive P-core performance in combination with power-efficient E-cores Intel Thread Director assigns each workload to the proper cores for optimum performance. Selected processors are also suitable for hard real-time applications with Intel TCC and TSN. In combination with full support for Real-Time Systems’ hypervisor technology, they are the ideal platform to consolidate a multitude of different workloads on one single edge platform. As this applies to low-power and high-performance scenarios alike, it enables highly sustainable designs with a small ecological footprint.”