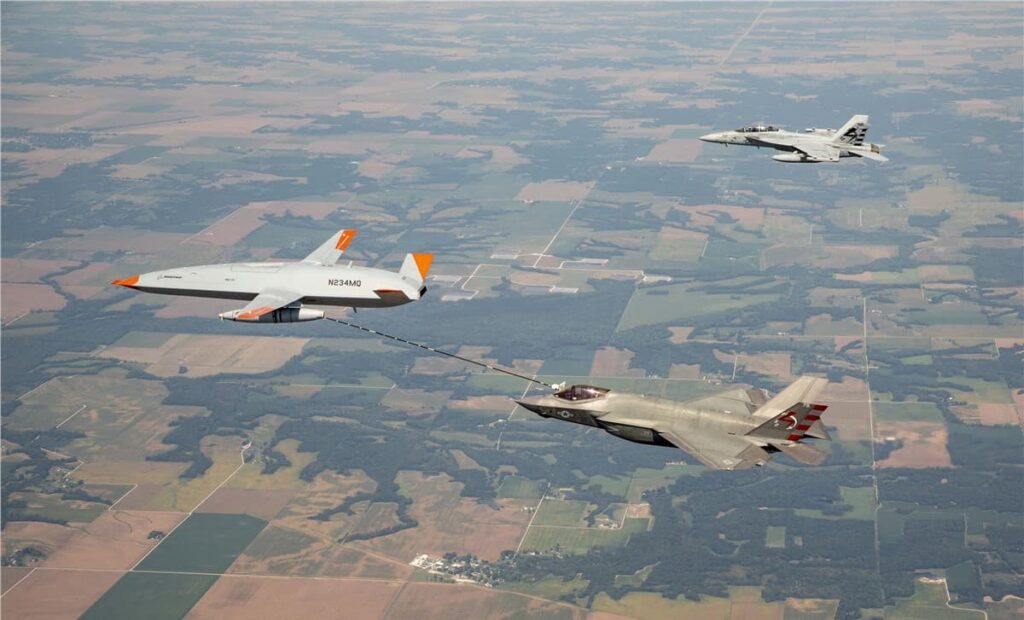 During the flight, an F-35C test pilot from the Navy’s Air Test and Evaluation Squadron Two Three (VX-23) conducted a successful wake survey behind T1 to ensure performance and stability before making contact with T1’s aerial refueling drogue and receiving fuel.

The T1 flight test program has completed more than 120 flight hours in two years, gathering data on everything from aircraft performance to propulsion dynamics to structural loads and flutter testing for strength and stability. This data has been integrated back into the aircraft’s digital models to strengthen the digital thread connecting aircraft design to production to test to operations and sustainment. Boeing is currently manufacturing the first two MQ-25 test aircraft.

The T1 will be used to conduct a deck handling demonstration aboard a U.S. Navy carrier in the near future to help advance the carrier integration progress.

Capt. Chad Reed, the Navy’s Unmanned Carrier Aviation program manager, commented: “Every test flight with another Type/Model/Series aircraft gets us one step closer to rapidly delivering a fully mission-capable MQ-25 to the fleet. Stingray’s unmatched refueling capability is going to increase the Navy’s power projection and provide operational flexibility to the Carrier Strike Group commanders.”

Dave Bujold, Boeing’s MQ-25 program director, said: “This flight was yet another physical demonstration of the maturity and stability of the MQ-25 aircraft design. Thanks to this latest mission in our accelerated test program, we are confident the MQ-25 aircraft we are building right now will meet the Navy’s primary requirement – delivering fuel safely to the carrier air wing.”