Northrop Grumman has successfully conducted a series of flight tests of the new Firebird UAS which can convert from autonomous to piloted configurations. During the flight demonstrations in North Dakota, the team was able to swap the configurations in under two hours. The Firebird has an approximate 80-foot wingspan, payload capacity of up to 1,700 pounds, and can fly in excess of 30 hours. 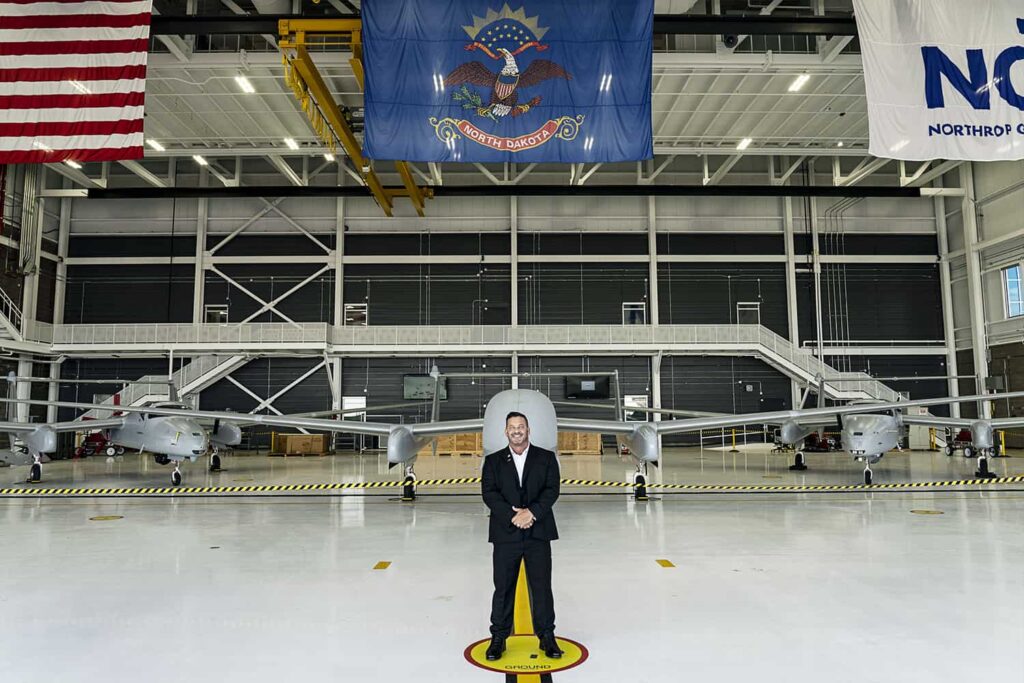 Describing the successful series of flight tests Mike Fridolfs, Northrop Grumman’s site director at the Grand Sky UAS Business & Aviation Park, said “The Firebird aircraft is not only unique in its manned or unmanned configurations but in its versatility in mission capability and flexibility for our customers to tailor it exactly to their needs”.

The Firebird test flights included several firsts for Northrop Grumman. It was their first ground-based ‘sense and avoid’ operation, and it was their first unmanned aerial system (UAS) operation in national airspace. Another milestone was the first Firebird UAS day/night operations, consisting of 36 hours of flight operations over a 38-hour period.

The Grand Forks location for the test flights in North Dakota was carefully selected by the Northrop Grumman team. The global aerospace and defense technology company set up shop at Grand Sky, the nation’s first commercial UAS business and aviation park located 15 miles west of Grand Forks and nestled right next to the Grand Forks Air Force Base. Those factors, plus collaboration from other UAS companies and a pipeline of talent from the University of North Dakota drew them to expand to the region.

Ensuring Firebird could rise to its full potential and satisfy end users required unique conditions and a unique location. North Dakota is home to Vantis, the nation’s first and only statewide BVLOS network, which augmented the demonstration of mission relevant operations in Beyond Visual Line of Sight (BVLOS) autonomous mode.

Nicholas Flom, Executive Director of the Northern Plains UAS Test Site explained, “Having existing infrastructure and approvals in place for companies provides turn-key services to those wanting to test advanced UAS missions. The State of North Dakota’s investment and deployment of Vantis, the state’s BVLOS network, will further enable more opportunities for many more UAS users.”

Keith Lund, CEO & President of the Grand Forks Region Economic Development Corporation said “UAS companies operating in our region benefit from lower operating costs and uncluttered air space. With these assets, operating environment, and ecosystem, we’ve had success attracting UAS technology companies to our area and this sector continues to grow in the Grand Forks region.”

Northrop Grumman’s expansion and innovation has proven that the region’s infrastructure makes North Dakota the first for UAS and the best for business. “North Dakota makes it very easy to be successful,” said Fridolfs. “What happened with our Firebirds was possible because of the significant and enduring support of the local Grand Forks community.”