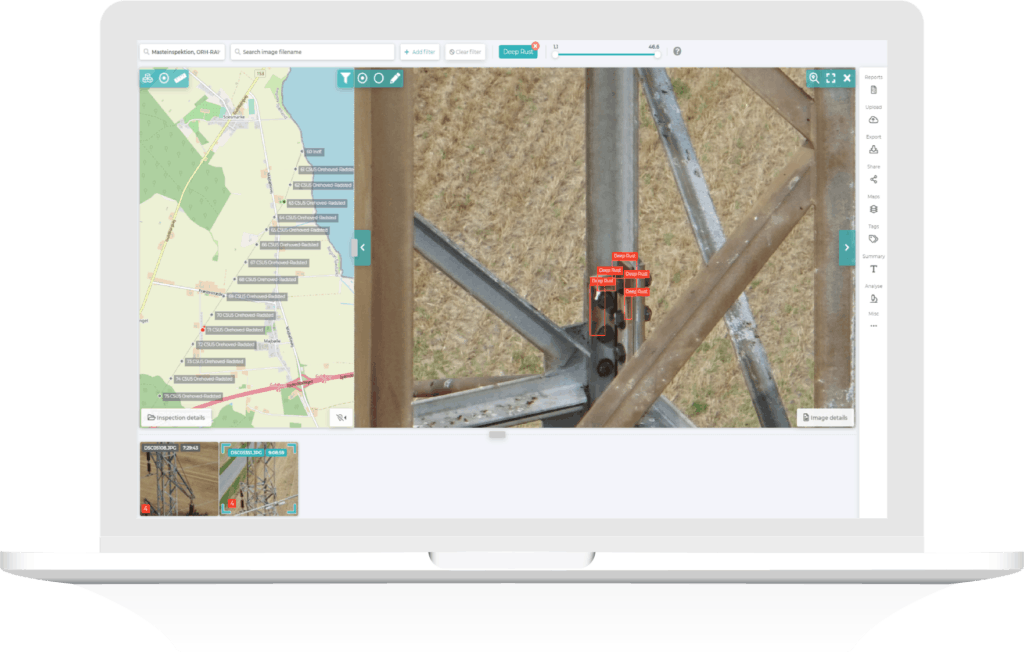 Energinet has been working with Scopito’s visualization platform since 2014. With many of Energinet’s towers reaching end of their lifetime rust is the biggest issue, both surface and deep rust. In order to extend the lifetime of their lines, Energinet needs to find affected areas, and evaluate how to best prioritize their resources. This is where AI comes into play.

“It made sense for us to work with Scopito on this, as the software is already an integral part of our workflow,” says Kenneth Nørup Knudsen, Energinet.

The algorithm’s first task is to identify areas where rust is present, by looking at inspection images. Today, overflight images are captured from a helicopter to keep the data-load to a minimum, but once the algorithm is ready, Energinet plans to add a significantly more cost-effective fixed-wing drone. This hasn’t been possible earlier, due to the massive amount of data it would produce, which would be too much for a human to handle. However, once they have the algorithm processing images, that won’t be a problem for Energinet.

Once rust is identified, the algorithm must prioritize which areas of the line should be addressed first. If the rust at a certain stretch is too severe, it might be more beneficial to focus on a part of the line, that has a higher chance of being repaired. Several factors play a role in this evaluation, and getting it right is crucial to extending the lifetime of Energinet’s assets.

“These algorithms that we’re training are going to answer some pretty complicated questions.” Says Ken Falk, CEO & Founder of Scopito “Not only will they have to detect and categorize rust, but also evaluate which towers should be prioritized first.”

Categorizing the rust found on the imagery is the most complicated task, as rust is very difficult to categorize. It starts as surface rust, and gradually grows to become deep rust. In between are an undefined number of stages, each of which can be very difficult to recognize from the outside. The number of categories needed depend on a variety of factors, from the accuracy of the algorithm, to the resources Energinet’s maintenance team has available.

“It’s a task even professionals can disagree on the results of.” Says Ken Falk, Scopito. His team is working their way through Energinet’s dataset, identifying, and labelling the different degrees of rust, consulting with Energinet linemen to reach the most accurate results. They are expecting the algorithm to have an accuracy of 90% or above, once the three-month initial training period is over. From there, the accuracy will increase with the amount of data processed.

Conservatively speaking, an algorithm can analyse around 1.000 images/hour, as opposed to an optimistic 175/hour for a lineman. This means a significant increase in speed. Another advantage of the algorithm is the absence of distractions, which can easily lead to errors for linemen.

“It will be interesting to see if the algorithm will be better at correctly categorizing the rust than it’s human colleagues. We assume it will, because it will be impartial and not affected by any outside factors, but there is no way of knowing until the operation is running.” Says Ken Falk.

The project will run for a year, out of which the first three months will be dedicated to training the algorithms and developing the right “view” for the data in Scopito.