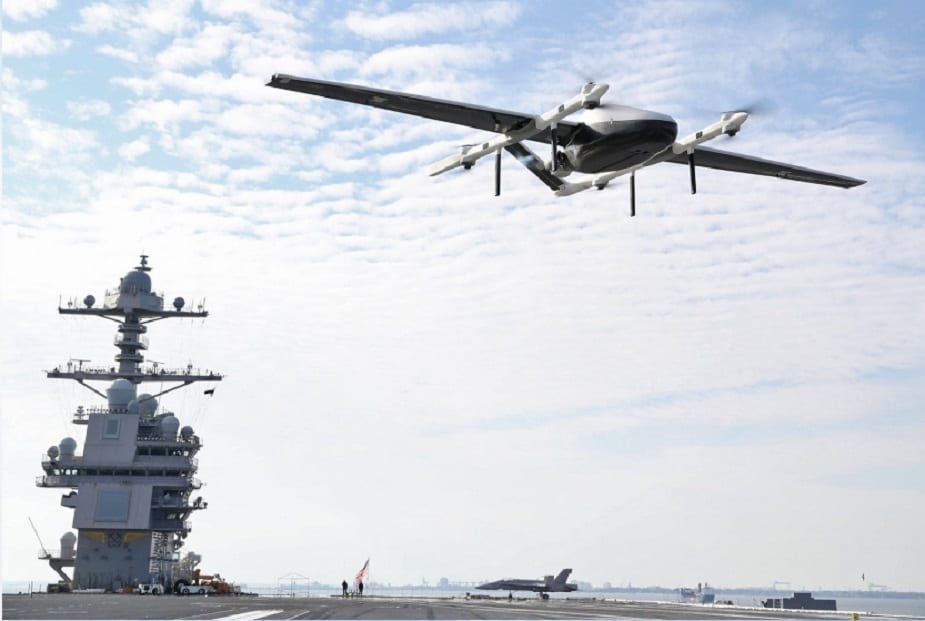 Naval Air Force Atlantic has conducted a test of a new prototype unmanned aircraft, known as Blue Water UAS, designed to provide long-range cargo transport in support of U.S. Navy forces operating in open water with extreme wind conditions. The prototype is currently capable of operation in some of these conditions and further development will be required to meet the full Naval requirement.

The trial involved the transportation of light-weight logistical equipment from the Mid Atlantic Regional Maintenance Center (MARMC) at Naval Station Norfolk to the aircraft carrier USS Gerald R. Ford (CVN 78) while the vessel was in-port.

Historic data from Navy casualty reports show that warships that move to non-mission capable or partially mission capable status often do so due to logistics issues like the need for electronic parts, 90 percent of which are logistical deliveries weighing less than 50 pounds. Currently, aircraft such as MH-60 helicopters and MV-22 tilt-rotor aircraft fly these missions, and the Blue Water UAS could be used to reduce the cost and inefficiency of these flights.

The Blue Water UAS can be operated from both a vessel and the shore. It requires minimal maintenance and features a control station with a footprint of approximately the size of a shoebox, requiring almost no infrastructure. The results of further experimentation with the aircraft will help the Navy decide whether to transition the technology to support fleet initiatives.

The Naval Air Warfare Center Aircraft Division (NAWCAD) will continue to work with its industry partners to enhance the UAS in-house with developments such as folding wings for better handling and ship storage. NAWCAD will also consider alternative UAV designs with advanced propulsion systems to provide greater range and payload performance, optical and infrared collision avoidance and landing systems, and navigation systems not only dependent on GPS.

Rear Adm. John F. Meier, Commander, Naval Air Force Atlantic, said: “This UAS demonstration leverages cutting edge technology to enhance our logistical efficiency across the Naval Air Force. We have come a long way in integrating unmanned systems in Naval Aviation and the lessons learned today will help to accelerate this capability to the fleet.”

Capt. Paul Lanzilotta, commanding officer of the USS Gerald R. Ford, said: “Carrier logistics is a complex and diverse problem set. Sometimes getting a small part delivered to the ship has a big impact on the availability of an embarked system or aircraft. Having UAS like Blue Water may improve our ability to quickly meet specific logistics needs where payload and ship’s location permit.”

Rear Adm. John Lemmon, NAWCAD Commander, stated: “Deterring, fighting, and winning future conflicts will require more from us. Developmental platforms like our Blue Water UAS are important for exploring opportunities to maintain a competitive edge with top-tier technology and improve the logistical support of America’s Sailors and Marines.”