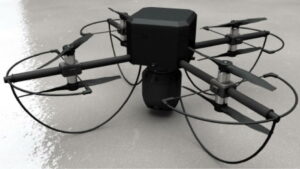 COMSovereign’s Drone Aviation business unit has delivered its first fully integrated LTE network, based on a new tethered drone-based aerial platform that will allow the customer to deploy a fully operational network without reliance on existing infrastructure.

The WATT 200, combined with FeatherLite, can be quickly deployed to create a network “bubble” supporting connectivity within range of the drone in response to emergencies and natural disasters, temporarily increase wireless coverage at special events, or to provide connectivity in areas without any existing infrastructure. It can also link into existing commercial networks through SATCOM, microwave backhaul, or wired infrastructure. The complete system is contained within two ruggedized suitcases for easy deployment nearly anywhere.

Felicia Hess, Chief Executive Officer of Drone Aviation, commented: “The new WATT 200 system we delivered further builds upon our extensive expertise in designing and building persistent tethered aerial platforms. By integrating VNC’s FeatherLite small cell platform into WATT 200, we have created an unique drone-based LTE capability that can be deployed in 5 minutes and provide long duration connectivity at the touch of a button.”

Dr. Dustin McIntire, COMSovereign’s Chief Technology Officer, said: “Based upon feedback from telecom service companies, operators, and government agencies, we believe that there are many potential customers with stringent requirements that can only be solved with a rapidly deployable network solution. Our tethered drone system delivers many benefits including improved safety, secure communications, and uninterruptible ground-based power, allowing sustained airborne communications and operations unmatched by battery powered drones. We intend to build upon the flexibility of our tethered aerial platforms with multiple solutions planned for release in the next few months designed to enable a broad set of capabilities for service companies, operators, first responders, and military/intelligence users.”