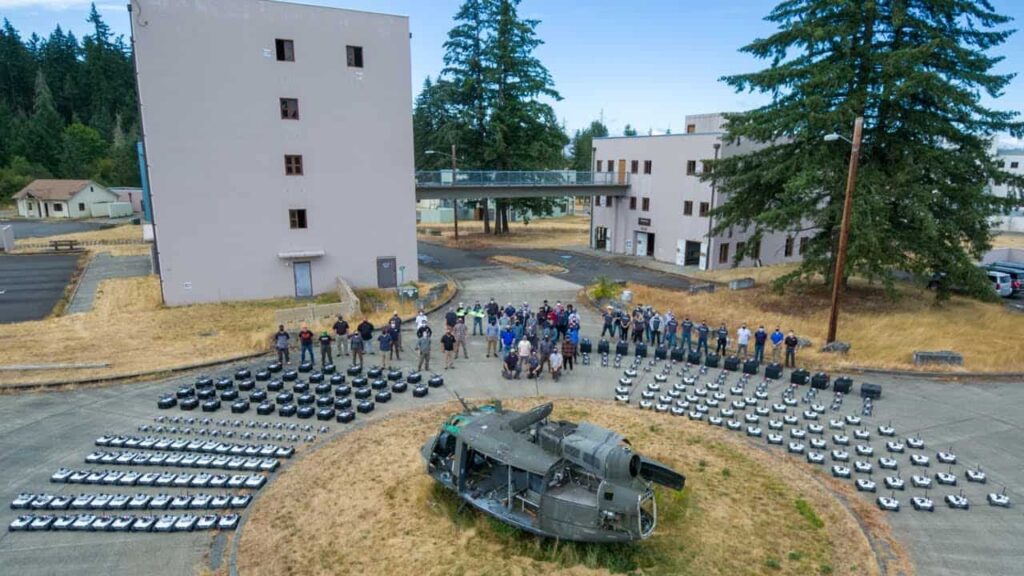 DARPA has recently conducted the fourth field experiment for its OFFSET (OFFensive Swarm-Enabled Tactics) program, during which swarms of autonomous air and ground vehicles were tested at the Leschi Town Combined Arms Collective Training Facility (CACTF) at Joint Base Lewis-McChord (JBLM) in Washington. The OFFSET program aims to develop large-scale teams of collaborative autonomous systems such as UAVs (unmanned aerial vehicles) and UGVs (unmanned ground vehicles) that are capable of supporting ground forces operating in urban environments.

The main Swarm Systems Integrators for the project are Northrop Grumman Mission Systems and Raytheon BBN Technologies, who are creating swarm systems architectures, advanced interfaces, and virtual and physical swarm testbeds. During this experiment, the Integrators tested autonomous UGVs and fixed-wing and multirotor UAVs in a multi-stage interactive scenario that required the vehicles to locate and secure multiple simulated items of interest in an urban operational scenario.

The swarm commanders selected particular tactics and strategies for the test series according to a particular swarm’s capabilities. Using real-time swarm data and scenario analysis provided by the DARPA experimentation team after each run, the Swarm Systems Integrators extracted insights from each mission and generated new strategies to improve their following test runs, in addition to future technology development.

During this series of field experiments, Swarm Systems Integrators will look for opportunities to incorporate novel swarming technologies, including those developed by Swarm Sprinters, into their own respective architectures. Swarm Sprinters for this phase, including Johns Hopkins University Applied Physics Laboratory; Michigan Tech Research Institute; University of Buffalo; and Northwestern University, demonstrated component technologies designed to enhance the Swarm Systems Integrators’ capabilities for mission execution.

Timothy Chung, the OFFSET program manager in DARPA’s Tactical Technology Office (TTO), commented: “The Swarm Systems Integrators have been steadily improving their capabilities, each approaching the testing scenarios in unique ways. Being able to test large-scale swarms in complex urban environments will allow us to extract new insights into the best ways to use a swarm, especially as our field tests increase in size, complexity, and duration.”