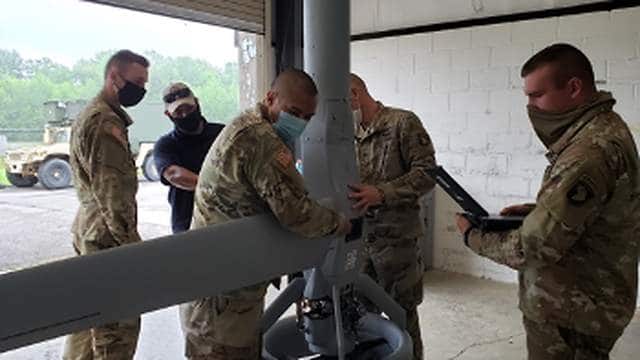 Martin UAV’s V-BAT VTOL (vertical takeoff and landing) ducted-fan UAS (unmanned aerial system) has been delivered to the U.S. Army’s 101st Airborne, 2nd Infantry Brigade Combat Team in order to help the Army form its requirements for the Future Tactical Unmanned Aerial System (FTUAS) program. The goal of FTUAS is to evaluate potential candidates and select a replacement for the Army’s current RQ-7 Shadow UAS, with a focus on runway- and launcher-independent VTOL systems.

The V-BAT is the second system to be evaluated during the initial FTUAS phase. The Screaming Eagles are the first unit to train on the UAS, which features a unique tail-sitter design with a ducted fan pusher configuration. All the other current competitors use the L-3 patented Latitude technology battery-operated quadcopter kit and a separate pusher or tractor configuration, which adds additional complexity that the V-BAT does not.

The Army and the UAS Project Office are hoping to keep the program on-schedule even with the recent COVID-19 delays, and participating units have developed smart and safe procedures for dealing with COVID-19 precautions. Martin UAV and their project teammates at Northrop Grumman are looking forward to receiving feedback from the warfighters.

Heath Niemi, Vice President of Global Sales and Development at Martin UAV, commented: “We are excited to be evaluated by this premier expeditionary light infantry unit. We think these soldiers will appreciate operational simplicity and high mobility of the true VTOL V-BAT. The V-BAT weighs in at 88 pounds (combat load), has a wingspan of 9 feet and exceptional endurance. We purpose-built a very safe, truly tactical system that a 2-Soldier team can launch and recover while standing inches away. A lightweight system transportable not just in helicopters, but also in small tactical vehicles, and clearly one of the best in class from the box launch sequence.”

“As a small and rapidly growing company we are moving very quickly in a number of directions. In the last 7 months, we have completed over 1,300 incident free hours at sea with ‘best in class’ mission readiness rates. We are working with the Navy, Marine Corps, and SOCOM to enhance the V-BAT for a number of missions. We are proceeding with a technology roadmap that more than doubles our payload capacity and our endurance within a year. Additionally, our international customers recognized the value of the V-BAT. International direct commercial sales and several pending opportunities, to include FMS, will be a big plus for us.”