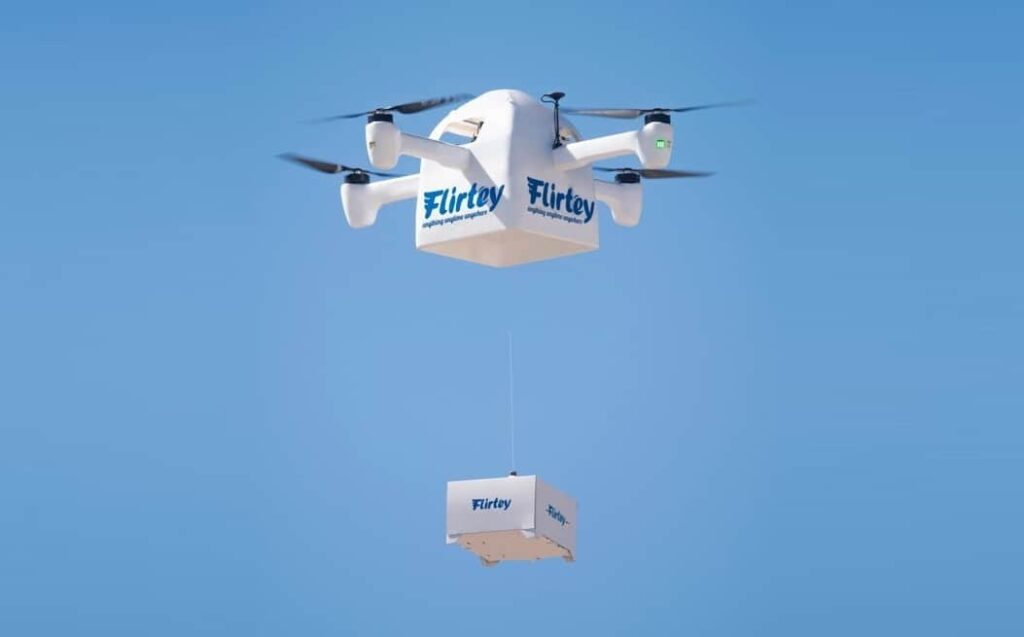 Flirtey has been granted a patent by the United States Patent and Trademark Office for a new system enabling safe precision delivery of packages by drone. The solution, encompassing hardware and software, lifts a package to pick it up, holds it securely in flight and safely lowers it via a retractable tether at the point of delivery.

The granted patent covers fundamental technology that is key to reliable and effective drone delivery and/or pickup of packages. Flirtey’s new patent describes a drone with hovering capability and a suspension mechanism that is used to hold the package to be delivered or picked up, a locking mechanism to hold and release the package, and a package delivery mechanism to deliver the package.

Flirtey has also recently been awarded a patent for a drone safety system component that detects errors in operation while the drone is in flight, deploying a safety mechanism if necessary. This action further mitigates the risk of contact and/or injury to bystanders, while also preventing serious damage to the unmanned aircraft. The company currently holds over 25 patents, granted and pending, in the United States and worldwide.

Matthew Sweeny, founder and CEO of Flirtey, commented: “We are thrilled that the United States Patent and Trademark Office has granted Flirtey another patent that is fundamental to safe and precise drone delivery. This is not pie in the sky; this is the foundation of safe delivery and/or pickup of packages from the sky. Flirtey’s drone delivery technology is now an industry standard in America.”