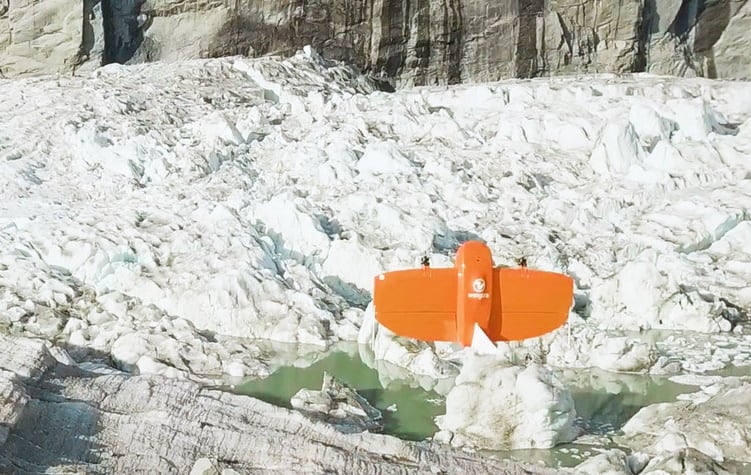 A climate research team from the University of Alaska Fairbanks Climate Adaptation Science Center has used drones to track the rising and falling of ice and water levels in the Suicide Basin glacial lake near Juneau, Alaska. The project will allow the team to predict the glacial lake’s seasonal flux and help protect neighboring communities from sizable flash floods.

A fixed-wing drone manufactured by Wingtra has been used to gather data for the creation of orthophotos and digital elevation models. The WingtraOne UAV (unmanned aerial vehicle) features multi-frequency PPK capability for high levels of location accuracy without the need for extensive ground control.

The research team is studying how water interacts with the Mendenhall Glacier, which sits next to the basin and holds it together. Mendenhall was once connected to Suicide Glacier before rising temperatures separated them, resulting in Suicide Basin. When basin waters rise to a point, Mendenhall Glacier can no longer contain them and the entire basin drains, immediately causing flash floods.

The flash floods in the Suicide Basin began in 2011, and have damaged infrastructure in the valley several times. The orthophotos and digital elevation models from the drone data allow the team to assess changes to ice levels atop Suicide Basin, and track the water level and interactions with the Mendenhall glacier.

Gabriel Wolken, head of the research team, commented: “The main issue is that it’s ice covered so we can’t really see the water as it fills up the basin on a seasonal basis. Alaska is a big place. There’s virtually nothing we address that we consider small here. So if it’s going to be a drone, we have to have something that can actually fly for a long time, fly high enough to be able to handle the complex terrain that we’re constantly dealing with and provide the resolution that’s required for the analyses that we’re doing.”

“The WingtraOne drone covers a large area, efficiently and provides data that is high quality in terms of visualization and location accuracy.”

“This flooding potentially threatens a bridge that is connected to the road system. And this is the only road that would connect residents on the north side to hospitals and other vital facilities, so if this bridge was impacted it would cause some very serious issues for a lot of people.”

To find out more about the project and the WingtraOne drone, read this case study on Wingtra’s website.