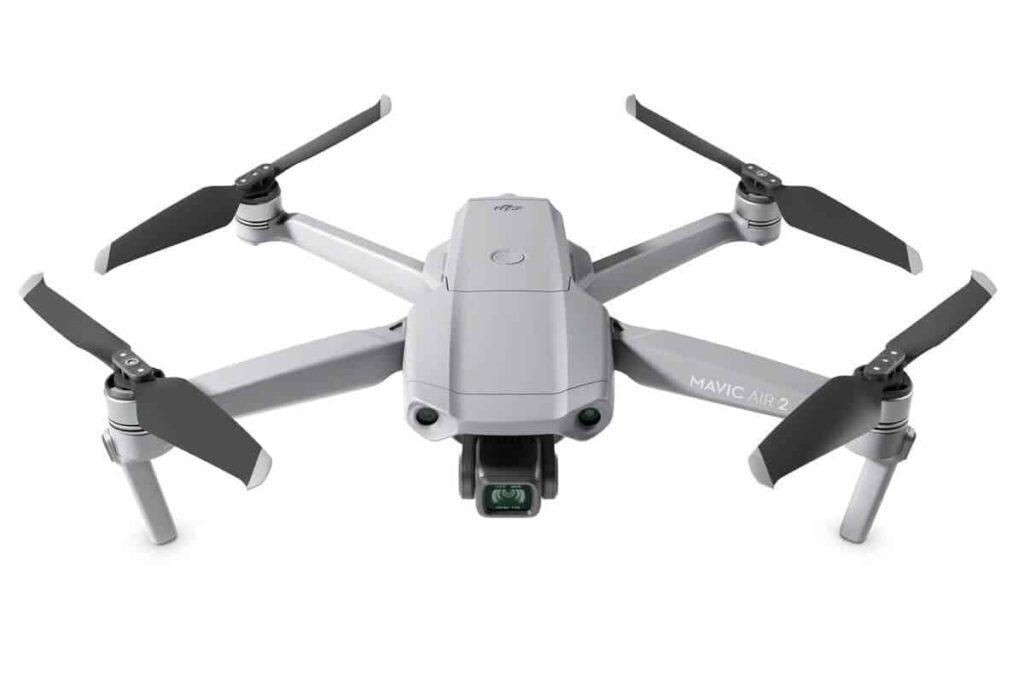 Mavic Air 2 is the first drone in the Mavic series to offer 4K video at 60 fps and 120 Mbps. Users can also record content using HDR video, 4X Slow Motion in 1080p at 120 fps or 8X Slow Motion in 1080p at 240 fps, as well as 12-megapixel or 48-megapixel images. A mechanical 3-axis gimbal helps compensate for camera shake to create smooth and stable footage, even in unpredictable conditions.

HDR photos: Mavic Air 2 automatically captures seven varying exposures of the same photograph, merging them together to bring out a highly dynamic image
Hyperlight: designed for low-light scenarios, taking multiple photographs and merging them to bring out a clear image with less of the noise which usually occurs in low-light scenes
Scene Recognition: Mavic Air 2 can recognize five categories of scenes including sunsets, blue skies, grass, snow, and trees, then optimize settings to bring out the highest degree of color, detail, and tones

ActiveTrack 3.0: Select a subject for Mavic Air 2 to automatically follow. The third iteration of ActiveTrack uses state-of-the-art mapping technology and new flight path algorithms to offer improved subject tracking and obstacle avoidance, along with the ability to quickly re-engage the subject if it temporarily moves behind an object.
Point of Interest 3.0: Set an automated flight path around a specific subject. The updated iteration improves surface recognition to better dynamically track subjects.
Spotlight 2.0: Found in professional DJI drones, Spotlight locks a subject in the frame while the user has free operation of the drone’s movement.

The Hyperlapse feature provides timelapse functionality but with the added element of the drone physically moving. Hyperlapse can be shot in a max resolution of 8K in one of four flight modes: Free movement, Circle, CourseLock and WayPoints. Pilots can also choose from several pre-programmed flight maneuvers known as QuickShots, which use a 3-axis mechanical gimbal and electronic image stabilization.

Weighing only 570 grams, the Mavic Air 2 features new motors, new electronic speed controllers (ESCs), enhanced battery technology and an aerodynamic design to provide a maximum flight time of up to 34 minutes. DJI’s proprietary OcuSync 2.0 transmission technology has been upgraded to deliver a reliable and stable HD video feed from the drone at a maximum distance of 10km. OcuSync 2.0 supports both 2.4GHz and 5.8GHz frequency bands and uses an auto-switching feature to move between the two based on signal strength, while anti-interference technology blocks unwanted signals to keep the video feed clear.

Mavic Air 2’s new safety features include obstacle sensors on the front and rear of the drone that warn pilots when they’re too close to an object, and can also be set to stop the drone from moving any closer to avoid collision. Additional sensors and auxiliary lights on the bottom of Mavic Air 2 assist with several functions including smooth, automatic landing even in difficult lighting. Mavic Air 2 also comes equipped with DJI’s GEO geofencing solution to help keep drones away from the highest-risk locations, such as busy airports.

Advanced Pilot Assistance System (APAS) 3.0 allows the Mavic Air 2 to automatically create a new path around, under or over the object to avoid collision, giving pilots the confidence to fly in more complex situations while focusing on image and video capture. Using 3D mapping, the updated version aids in smooth transitions and more fluid movements around objects even in highly complex environments.

Mavic Air 2 is also the first of DJI’s consumer-grade drones to include AirSense technology, which provides enhanced safety by warning drone pilots of other aircraft nearby. AirSense uses ADS-B technology to receive signals from nearby airplanes and helicopters, and displays their location on the drone pilot’s control screen. As these other aircraft approach the drone, AirSense will warn the drone pilot with messages, sounds and vibrations, enhancing the pilot’s awareness and ability to move the drone safely away.

DJI President Roger Luo commented: “Mavic Air 2 is another milestone for DJI, demonstrating that our smartest consumer drone does not have to be the largest. While the Mavic Air 2 bears all the hallmarks of the Mavic drone family, we had to completely rethink its design and development process. Our goal was to create a drone that offered the best overall experience possible to even the most novice pilot. We hope our drones can help boost creativity and become a fun yet educational experience that can be enjoyed, even at this unprecedented moment in history.”

Brendan Schulman, DJI Vice President of Policy & Legal Affairs, said: “DJI has an unwavering commitment to enhance drone safety with technology, and Mavic Air 2 implements yet another pioneering safety solution for drone operations. Our ambitious commitment to installing ADS-B in our new product models means Mavic Air 2 will be the world’s largest single deployment of ADS-B receiver technology, fulfilling and furthering our vision as the industry’s leader on voluntary safety efforts.”