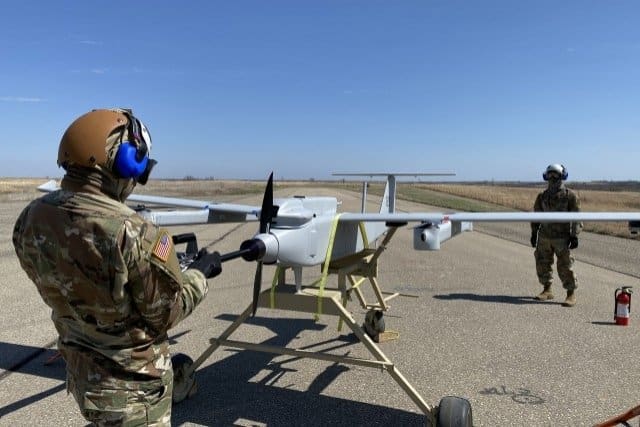 The U.S. Army has begun its evaluation of a range of selected unmanned aircraft systems (UAS) as part of the Army Futures Command-directed Future Tactical Unmanned Aircraft System capabilities assessment, which aims to find a replacement for the army’s current RQ-7 Shadow tactical UAS.

The 1st Armored Brigade Combat Team, 1st Infantry Division is the first U.S. Army Forces Command unit to demonstrate one of the four vertical take-off and landing (VTOL) UAS, the Arcturus JUMP 20. Data gathered during the assessment will be critical to determining the requirements for the RQ-7 Shadow replacement.

The Arcturus JUMP 20 is the largest of the selected systems, weighing 210 pounds with an 18-foot wingspan. It features a StreamCaster radio from Silvus Technologies, which provides tactical MIMO (Multiple Input Multiple Output) MANET (Mobile Ad Hoc Networking) communications abilities such as peer-to-peer communications between multiple users. The StreamCaster allows the Arcturus UAV to maintain high bandwidth, meshed video and data communications even in challenging conditions.

The Arcturus’ extended flight endurance allows multiple operators to take turns training on the payload at altitude, while a second aircraft conducts repeated launches and recoveries to train operators and crew chiefs on critical modes of flight. The aircraft also features reduced acoustic signature compared to the Shadow.

“We’re used to screaming at each other and having to use radios in order to communicate,” said Spc. Christopher McCoy, a crew chief assigned to 1st Engineer Battalion, 1st Armored Brigade Combat Team. “You can stand right next to this aircraft and not even raise your voice.”

According to Spc. Nicholas Miller, an unmanned aircraft systems operator also assigned to 1st Engineer Battalion, the JUMP 20 maintains the ability to launch and recover from a confined area with minimal ground support equipment. “Currently, we need a runway for launch and recovery of the Shadow. With the VTOL system on the JUMP 20, we don’t need any of that, we’re working with half the equipment.”

Over the next five months, the soldiers will operate the system as a surrogate for their RQ-7 Shadow, performing similar tactical tasks for the BCT, but with the added vertical take-off and landing capability and control while on the move. The assessment utilizes a crawl, walk, run mentality, progressing through operator and collective training, then culminating in brigade level field training exercises and a Combat Training Center rotation.

The four other units participating in the assessment have been assigned the Martin V-Bat, Textron Aerosonde HQ, L3 Harris FVR-90, and a second Arcturus UAV JUMP 20.