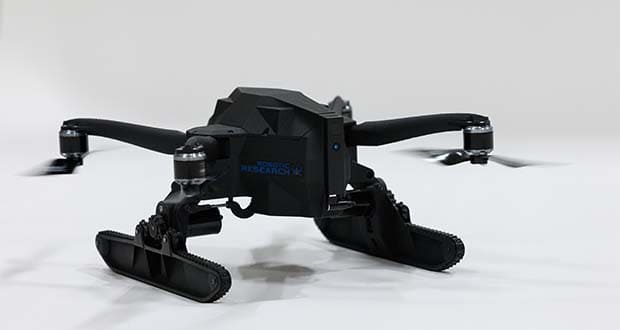 Robotic Research, a developer of autonomy and robotics technologies for defense and commercial applications, has announced the debut of the Pegasus Mini, a smaller version of the previously-introduced Pegasus transformable hybrid UAV/UGV (unmanned aerial vehicle/unmanned ground vehicle) that can both drive on land and fly. The new transformable drone will be introduced at CES 2020 in Las Vegas.

Features of the Pegasus Mini hybrid UAV/UGV include:

Alberto Lacaze, president of Robotic Research, commented: “We are excited to be at CES to showcase Pegasus as a new line of transformable robots and debut the Pegasus Mini, which offers a super-compact yet powerful drone and land vehicle combination capable of bringing remote cameras and sensors into previously unreachable locations. This small but mighty system has immense versatility and reach like no other robotic vehicle, flying at very high speeds with a payload capacity that can carry important tools to reach critical locations in unpredictable environments. We look forward to leveraging these unique features of the Pegasus Mini to provide more flexible, easily deployable, autonomous systems for customers in both the commercial and federal markets.”