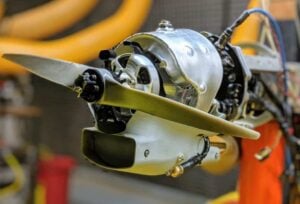 NWUAV has consistently aimed for continuous improvement of the engine as well as ways to reduce maintenance requirements, intending for the NW-44 to perform as robustly as possible in real-world environments. After considering feedback from field maintainers and operators, NWUAV recently upgraded the engine’s muffler and generator, resulting in substantially reduced onsite maintenance and downtime.

Chris Harris, President and Owner of Northwest UAV, said: “After 21,000 hours it’s pretty apparent what can and will go wrong. Not just on the engine system itself, but also with how the engine is being operated and maintained in very harsh environments with limited resources. This extensive insight can’t be duplicated in a test cell.”

“The goal is to reduce the touch-time on the engine to only require scheduled spark plug changes, and the muffler update is part of that effort. After each flight, engine operational data is downloaded on location and then analyzed and approved by a NWUAV specialist prior to the next flight. The ability for operators to be in immediate, direct contact with our experts and provide us with this data and direct feedback is a welcome, critical loop in support of our customers’ successful operations and our internal efforts for continuous improvement.”

Jeff Ratcliffe, Chief Technical Officer of NWUAV, commented: “Traditionally, engines for the Tier II UAV weight class are built to be throw-away engines. That means they are not likely designed and built for 10-15-hour days at 45c (like the NW-44 Engine), rather they’re built for a few hours at the local airfield – on a nice day. While we understand why OEMs initially use low-cost foreign-made engines from the hobby market – it can be a risky and potentially more expensive undertaking for the needs of professional unmanned systems today.”

“As the industry matures, COMPLETE traceability has become as critical to the engines as the parts themselves. Sophisticated customers will expect to know every aspect – who, what, where and how – of every component of the engines, as well as what it experienced prior to delivery. Simply put, untraceable components make the lifespan and containment of faulty components unpredictable and unmanageable. That is why the NW-44 is American Made, we control the quality and traceability of our parts.”

Planned upgrades for the NW-44 engine include an AI-based module that will predict imminent failures and indicate required maintenance, carbon build-up resistant piston rings, and an altitude-compensating carburetor as well as a lighter weight version of the NW-44’s multi-fuel variant.