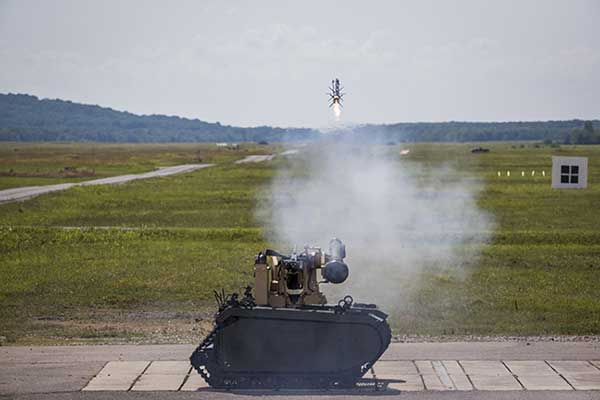 The Javelin Joint Venture team has announced that it has successfully remotely fired Javelin missiles from a Kongsberg missile launcher mounted on a Titan unmanned ground vehicle (UGV). The demonstrations took place at the U.S. Army Redstone Test Center in Alabama, and served as a validation of the ingregrated weapons platform concept comprised of the unmanned vehicle, weapons station and missile.

The Javelin Joint Venture team is a collaboration between Raytheon Company and Lockheed Martin. The Titan UGV utilised by the team was developed by QinetiQ North America and Milrem Robotics, and is a highly modular multi-mission platform normally used to provide “lighten-the-load” support for small dismounted military operations.

Javelin is a man-portable anti-tank and multi-target precision missile system that has been used extensively in Afghanistan and Iraq by U.S. and coalition forces. It has also been fielded on the Common Remote Operations Weapon Station-Javelin across U.S. Army Stryker 8×8 vehicle brigades in Europe.

“Javelin offers true fire-and-forget engagements to 4 kilometers in most operational conditions,” said David Pantano, Javelin Joint Venture vice president and Lockheed Martin Javelin program director. “Once the launch command is issued, soldiers and vehicle assets like the UGV can reposition out of harm’s way. These tests demonstrated our ability to evolve Javelin capabilities to address new missions in support of the warfighter.”