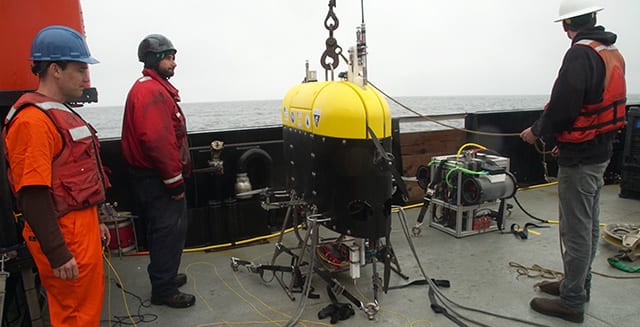 The Monterey Bay Aquarium Research Institute (MBARI) has announced that its researchers, in conjunction with engineers from Woods Hole Oceanographic Institution (WHOI), have partnered to test a new hybrid ROV (Remotely Operated Vehicle) / AUV (Autonomous Underwater Vehicle) that is designed to perform research in the mesopelagic zone of the ocean (between about 200 and 1,000 metres).

The Mesobot was designed at WHOI and developed with input from experts at MBARI, Stanford University, and the University of Texas Rio Grande Valley. Its initial phase of operation is powered and controlled using a fibreoptic tether attached to a surface mothership, like an ROV. Once the vehicle reaches a particular depth, the tether is released and spooled back onto the ship, and the Mesobot then operated autonomously like an AUV.

The Mesobot has been designed to track and study swimming and drifting animals at depths of up to 1,000 meters (3,300 feet), with a continuous mission endurance of up to 24 hours. These animals help support major fisheries such as tuna and swordfish, provide food for other large animals such as sharks and whales, and help regulate Earth’s climate by moving carbon from the surface to deep waters. The aim of the project is to build upon previous research on these animals performed using ROVs.

The Mesobot is also designed to be less disruptive than other underwater robotic systems, and is equipped with low-light 4K cameras, red lights that are less visible to marine life, and large, slow-turning propellers that minimize disturbances in the water.

Once the Mesobot was assembled, it was first tested in MBARI’s indoor saltwater test tank. After initial operation was confirmed, three days of open-water field tests were performed in Monterey Bay on MBARI’s research vessel Rachel Carson.

The Mesobot performed five dives at several hundred meters below the surface, testing the performance of its systems under real-world conditions and refining launch methods from the side of a rolling ship. One particular challenge was the management of the system’s thin ROV tether. MBARI’s “SmartClump,” a weighted bundle of sensors and cameras, was attached to the tether to help monitor its status closely.

“The suite of scientific instrumentation aboard the Rachel Carson and the expert ship handling and deck work were crucial to our success,” said Mesobot designer and lead engineer Dana Yoerger.

The eventual goal of the Mesobot project, which is funded by the National Science Foundation, WHOI, MBARI, and TED’s Audacious Project, is to perform research on the poorly-understood phenomenon of diurnal vertical migration, where marine animals such as jellyfish ascend hundreds of meters toward the ocean surface at twilight and then descend back down at dawn.