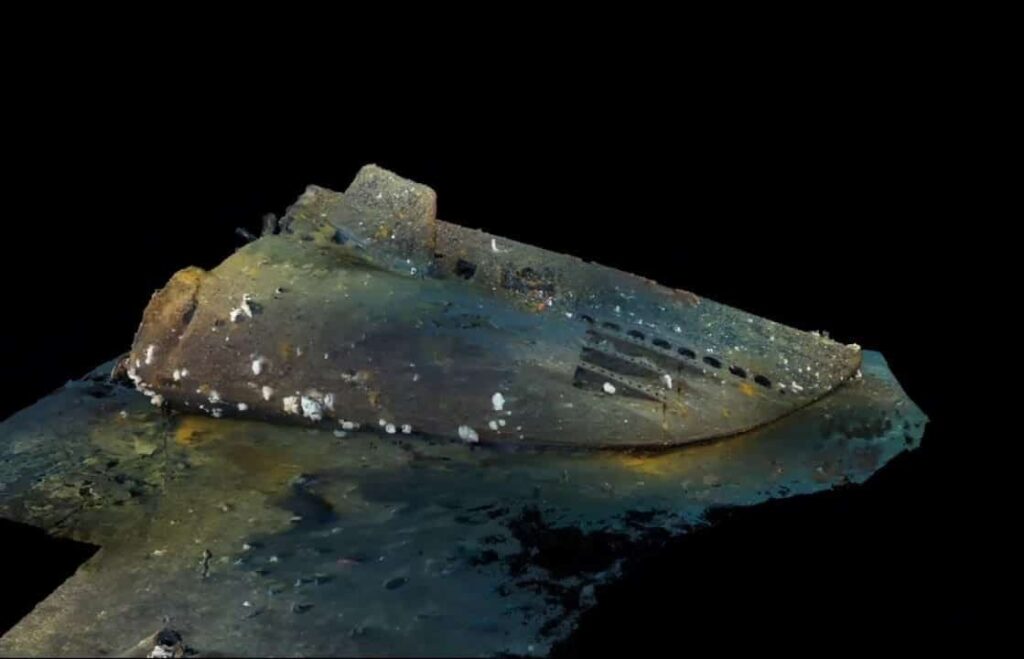 A team pioneering robotic ocean exploration has announced that it has found the bow of WWII Submarine USS Grunion (SS-216) in 2700 feet of water off the Aleutian Islands, Alaska. The ongoing WWII submarine discoveries lead by ocean explorer Tim Taylor are applying comprehensive 3D imaging to further subsea exploration.

The discovery was made utilizing a combination of autonomous underwater vehicles (AUVs) and advanced photogrammetry imaging. The finding of the lost bow section of the USS Grunion completes a vital missing part of the puzzle and answers the questions posed on many expeditions undertaken 13 years ago by the sons of the USS Grunion’s captain, Mannert L. Abele. Taylor stated, “I am honored to add to the discovery that was accomplished by the Abele brothers.”

USS Grunion was a Gato-class submarine commissioned on April 11, 1942 under the command of Lieutenant Commander Mannert L. Abele. On her way through the Caribbean to her first posting in Pearl Harbor, she rescued 16 survivors from USAT Jack, which had been torpedoed by a U-boat. Sent to the Aleutian Islands in June 1942, she operated off Kiska, Alaska, where she sank two Japanese patrol boats. Ordered back to the naval operating base in Dutch Harbor, Alaska, on July 30th, the submarine was never heard from again. She was declared overdue from patrol and assumed lost with all hands-on October 5th, 1942.

The project is taking the large data sets collected on the team’s discoveries and having them processed into 3D archaeological photogrammetry models. This scientific approach extracts geometric information from equipment that is already integrated in most of the modern underwater remote filming systems, advancing imagery collection into high-quality 3D data sets that will be used in archaeological research, historical archives, virtual and augmented reality, and educational programs and applications.

“This goes so far past video or still imagery, it truly is the future of recording historical underwater discoveries. Spending minimal time on site collecting a comprehensive 3D historical baseline model allows archaeologists and historians to spend months back home performing detailed research,” commented Taylor. who coordinates his discoveries with the Naval History and Heritage Command.

“Our mission at the Naval History and Heritage Command is to make certain the memory of our Sailors’ service will always be remembered, honored and valued. As Tim Taylor, and others like him, discover the final resting place for our lost Sailors, they help to carry out that mission,” said Robert S. Neyland, Naval History and Heritage Command’s Underwater Archaeology Branch Head. “We are grateful for the respectful, non-intrusive work he performs and the closure he brings to their families, their shipmates, and to the Navy.”

The USS Grunion expedition is part of the ongoing “Lost 52 Project” supported in part by STEP Ventures and has been recognized by JAMSTEC (Japan Agency for Marine-Earth Science and Technology) as the first and most comprehensive offshore underwater archaeological expedition in Japanese waters.