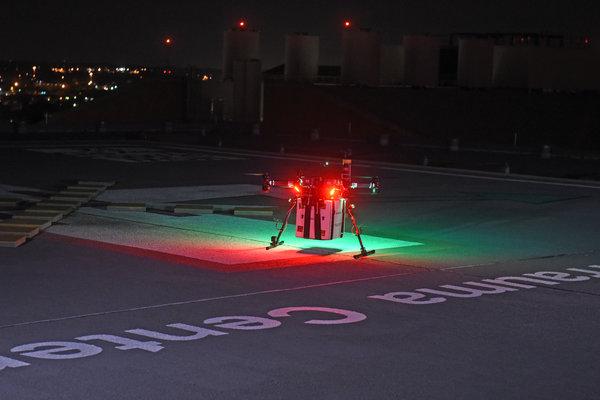 Silvus Technologies has announced that its StreamCaster 4200 MIMO (multiple-input multiple-output) radio has supported the world’s first unmanned aircraft system (UAS) flight that delivered a donor kidney to surgeons in Baltimore, Maryland for successful transplantation into a patient with kidney failure. The StreamCaster 4200 was used as the primary wireless datalink between the drone and the ground control station (GCS). The system operated flawlessly in a highly populated and dense urban environment at a distance of 3 miles.

Among the many technological firsts of this effort include: a specially designed, high-tech apparatus for maintaining and monitoring a viable human organ; a custom-built UAS with eight rotors and multiple powertrains to ensure consistently reliable performance, even in the case of a possible component failure; the use of a mesh network radios to control the UAS, monitor aircraft status, and provide communications for the ground crew at multiple locations; and aircraft operating systems that combined best practices from both UAS and organ transport standards.

On Friday, April 19th, at approximately 12:30am, a human donor kidney was loaded onto the UMMC drone. The flight, led by the University of Maryland UAS Test Site at St. Mary’s County, commenced at 1:00am. The vehicle traveled 2.6 miles (4.3 km) and flew for approximately 10 minutes. The human kidney was successfully delivered to University of Maryland Medical Center (UMMC) and was scheduled to be used for a transplant surgery at 5:00am.

Maryland faculty and researchers believe this prototype organ transport blazes a trail for the use of UAS to expand access to donated organs, improving outcomes for more people in need of organ transplants. Currently organs are transported by commercial aircraft or charter flights. Organ transplants have a limited window of cold ischemia time (CIT) in which an organ can be chilled and then have blood supply restored. As of January 2019, almost 114,000 individuals were on the national transplant waiting list and every day approximately 80 people receive organ transplants, according to the United Network for Organ Sharing – the nonprofit that manages the transplant system. For sensitive medical deliveries, reducing the amount of travel time in urban settings, as well as vibration during travel can help lead to better outcomes.