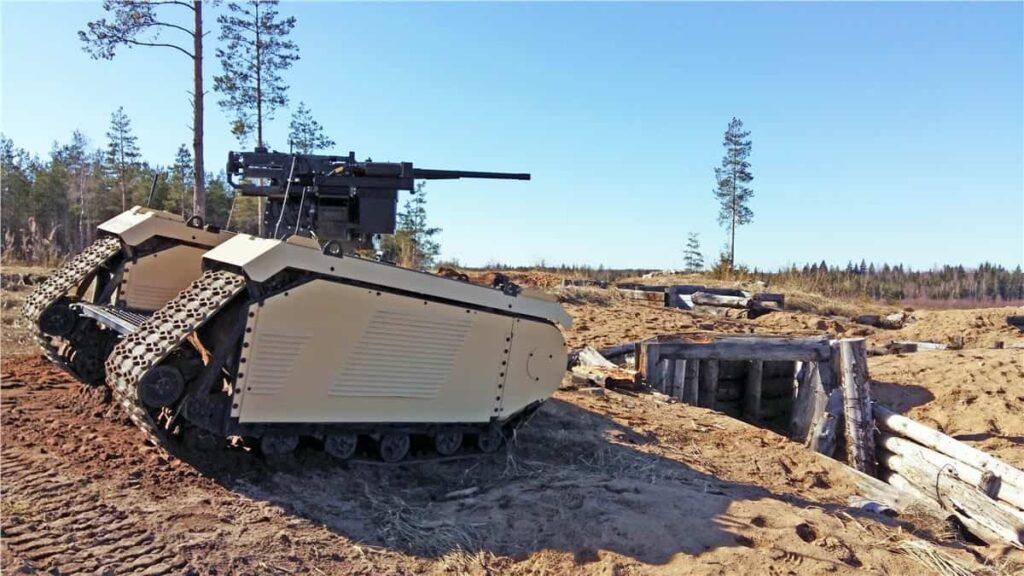 Milrem Robotics and ST Engineering have announced that the two companies have demonstrated a jointly-developed beyond visual line of sight (BVLOS) combat UGV (unmanned ground vehicle) armed with a 40mm AGL and a 12.7mm HMG during a live fire exercise held in Tapa, Estonia.

The joint warfare system consists of Milrem’s THeMIS unmanned ground vehicle and ST Engineering’s ADDER DM Remote Weapon Station and is intended as a force multiplier for dismounted troops that can be utilized in both urban and rural areas.

The combat UGV is a tracked all-terrain system with ground clearance up to 60 cm that can negotiate 60% slopes and pass 61 cm deep water obstacles. Its top speed is 20 km/h and it is powered by a diesel-electric drive that, depending on the mission, can offer 15 hours of constant operations without re-fuelling.

The Combat UGV can be armoured up to STANAG 4569 level 3 while keeping all of its dynamic capabilities mentioned above.

“Our joint combat UGV is one of the first armoured UGVs in the world that’s especially well suited for urban conflict areas,” stated Jüri Pajuste, Director of the Defence Programs Department in Milrem Robotics.

The system is equipped with an advanced medium-calibre weapon system armed with a 40mm AGL and a 12.7mm HMG. Both weapons passed live fire tests conducted in cooperation with the Estonian Defence Forces.

The combat UGV is configured for wireless BVLOS control from a distance of 1000 m and 2500 m in urban and rural areas, respectively.

The operator can command the system from an ergonomically-designed mobile or stationary crew station that is matched with a Graphical User Interface for intuitive workflow and task execution. The system significantly decreases the cognitive workload on the operator, reducing operator fatigue and improving combat performance.