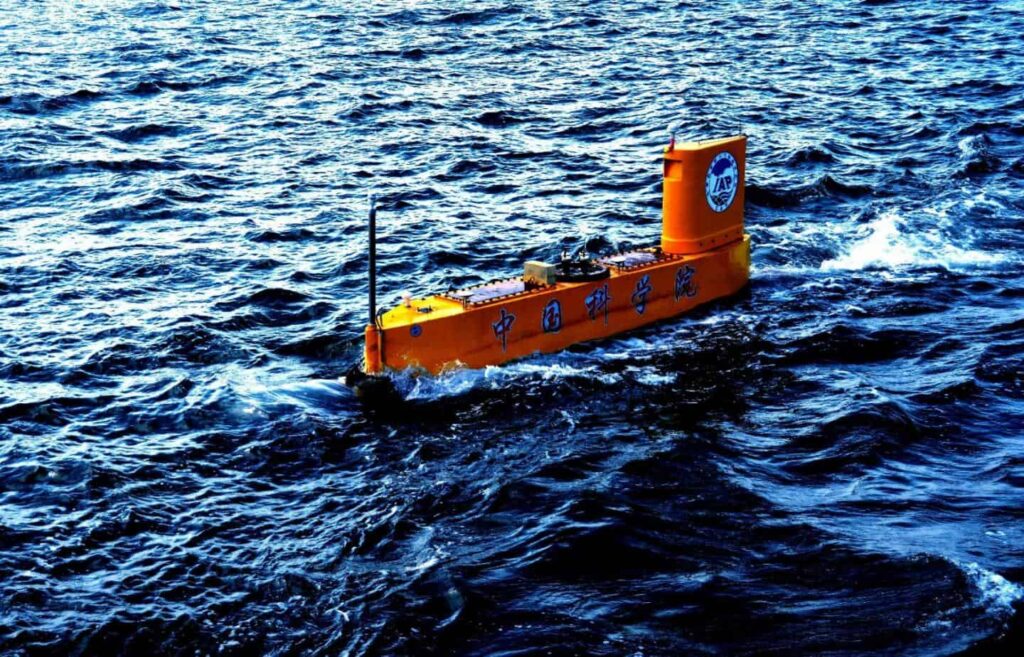 Scientists from the Institute of Atmospheric Physics at the Chinese Academy of Sciences have announced that they have launched a rocketsonde – a rocket designed to perform weather observations in areas beyond the range of weather balloons – from an unmanned semi-submersible vehicle (USSV) that has been solely designed and specially developed for this task. The results of initial sea trials were published in the journal Advances in Atmospheric Sciences.

Obtaining accurate meteorological and oceanographic (METOC) data requires conducting ocean-based meteorological and oceanographic sampling of an extensive marine environment that covers nearly three-quarters of the Earth’s surface. Traditionally this has been achieved by using ocean-based observation platforms such as ships and buoys, as well as satellites and aircraft. However, because these methods are expensive and/or logistically impractical to deploy over a wide – and often environmentally hostile – area, the data collected is patchy and therefore unreliable for marine and meteorological research.

According to lead author, Hongbin Chen, a professor of atmospheric and marine science at the Institute of Atmospheric Physics, radiosonde (a battery-powered telemetry instrument carried into the atmosphere usually by a weather balloon that records meteorological measurements and transmits them via radio to a ground receiver) is currently the principal method used to obtain the vertical distribution of meteorological data within the atmosphere, but the number of upper air sounding stations in the ocean is limited compared to land sites. Although both dropsonde weather balloons which are deployed from aircraft and record atmospheric data as they drop down to Earth, and driftsonde weather balloons containing meteorological instruments enclosed in a gondola – which depending on the pressure of the balloon, are capable of drifting in the stratosphere anywhere from five days to a few weeks or even months – are routinely used over the ocean, these cannot meet the needs of marine weather (such as typhoon and fog) research, numerical prediction, marine atmospheric boundary layer (MABL) modeling and marine satellite product validation.

“Launched from a long-duration unmanned semi-submersible vehicle, with strong mobility and large coverage of the sea area, rocketsonde (meteorological rockets that are capable of launching weather instruments up to 8,000 meters into the atmosphere) can be used under severe sea conditions and will be more economical and applicable in the future,” says Chen.

“The unmanned semi-submersible vehicle is an ideal platform for marine meteorological environmental monitoring, and the atmospheric profile information provided by rocketsonde launched from this platform can improve the accuracy of numerical weather forecasts at sea and in coastal zones,” explains study co-author Dr Jun Li, a researcher at the Institute of Atmospheric Physics. “Similar to Argo (the broad-scale global array of profiling floats that measures temperature/salinity in the ocean) which provides profiles of Thermohaline current, rocketsonde can provide profiles of atmospheric temperature, humidity, pressure and wind observations.”

In the future the researchers plan to use unmanned semi-submersible vehicles to provide a network of observations at sea that will extend weather sounding data over the ocean similar to that of the sounding network on land, says Chen, adding that they expect the unmanned semi-submersible vehicle observation network to provide three-dimensional observations of the internal structure of typhoons/hurricanes and to improve our ability to predict changes in a typhoons path or intensity.

“We are currently developing a new generation of USSVs which can carry various sensors relevant to marine science, including conductivity-temperature-depth, acoustic Doppler current profiler, and motion sensors to provide vertical profiles of the conductivity, water temperature, current velocity, and wave height and direction,” says Chen. “With that, a new interconnected USSV meteorological and oceanographic (METOC) observation network system will be developed to improve the efficiency of collecting METOC observations and provide comprehensive data at the temporal and spatial scales required to answer relevant scientific questions.”

By developing specially equipped USSVs that can record marine meteorological data in real-time over a wide area of the ocean that previously went largely unmonitored, the researchers hope to be able to fill some of the current meteorological and oceanographic data gaps, providing more robust data that will in turn help scientists to better predict and monitor weather events and oceanographic phenomena.