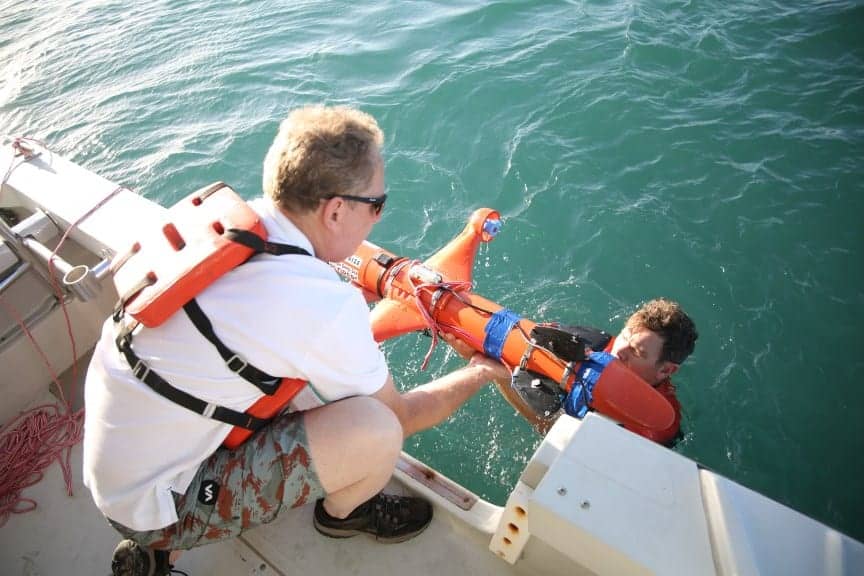 XPRIZE has announced that the three finalist teams competing for the $1M Bonus Prize, sponsored by the National Oceanic and Atmospheric Administration (NOAA), in its Shell Ocean Discovery XPRIZE, have tested their technologies in Ponce, Puerto Rico.

The $1M NOAA Bonus Prize is part of the $7M Shell Ocean Discovery XPRIZE, a three-year global competition challenging teams to advance ocean technologies for rapid, unmanned and high-resolution ocean exploration. To win the NOAA portion of the prize, competing teams need to demonstrate that their technology can identify and track a specified object in the ocean by tracing a biological or chemical signal to its source. The development of such technologies can help detect sources of pollution, identify hydrothermal vents and methane seeps, as well as track marine life for scientific research and conservation efforts. The winning devices could also be used to identify and track signals from sunken vessels including planes, ships, or submarines in the future.

“The NOAA Bonus Prize teams are developing exciting, pioneering technologies that will help us uncover the mysteries of the ocean,” said Jyotika Virmani, Ph.D., Executive Director of the Shell Ocean Discovery XPRIZE. “Having the opportunity to bring these teams, and their technologies, to beautiful Puerto Rico as originally planned is a win-win for everyone involved, and we were delighted to be able to work with our local partners.”

“XPRIZE represents the rapid scientific progress that can be gained through successful public-private partnerships,” said United States Secretary of Commerce Wilbur Ross. “Moreover, this competition plays a dual role: potentially providing NOAA with invaluable tools to oversee the health of our oceans, while also demonstrating the resilience of local Puerto Rican communities in the aftermath of the tragic hurricanes of 2017.”

The final field test fulfills XPRIZE’s commitment to Puerto Rico, after initial plans to host its round one field tests for the Ocean Discovery XPRIZE were cancelled due to the destruction and devastation of Hurricanes Irma and Maria in September 2017. The finalist teams showcased their technologies by trying to detect and track a plume from two sources in a test zone established off the south coast of Ponce.

“New technologies that can detect and trace chemical and biological signals in the ocean is another stunning achievement in expanding the blue economy,” said retired Navy Rear Adm. Timothy Gallaudet, Ph.D., acting under secretary of commerce for oceans and atmosphere at NOAA. “This great public-private partnership supports NOAA’s critical mission to conserve and manage coastal and marine ecosystems and resources.”

For this final field test, XPRIZE partnered with the Government of Puerto Rico, the Port of Ponce Authority, the University of Puerto Rico at Mayagüez and its Department of Marine Science in La Parguera, the United States Coast Guard, the Caribbean Coastal Ocean Observing System (CARICOOS), Ponce Yacht and Fishing Club, and multiple other government, nonprofit and commercial organizations to provide additional support technology, vessels, and logistical assistance.

“We are committed to providing the infrastructure and logistics to support the demonstration of new and exciting technologies, and at the same time show the scientific world the many benefits Puerto Rico offers as an attractive destination for research and innovation,” said Puerto Rico Governor Ricardo Rosselló. “Puerto Rico’s privileged location in the Caribbean makes it the ideal destination to carry out world-class research.”

The NOAA Bonus Prize finalists who opted to compete for this Prize were initially chosen by an independent judging panel of seven experts as semi-finalists for the Ocean Discovery XPRIZE. Teams in the final round include:

In addition to announcing its field test operations in Puerto Rico, XPRIZE also formed a new partnership with Ocean Infinity, the seabed survey and ocean exploration company that is credited for finding ARA San Juan, the previously lost Argentine Navy submarine. The partnership will provide XPRIZE with the highest-resolution ocean seafloor maps of the competition area. Combined with data from XPRIZE partner Fugro, these maps form the baseline against which teams’ technologies will be judged for the Grand Prize of the Ocean Discovery XPRIZE.