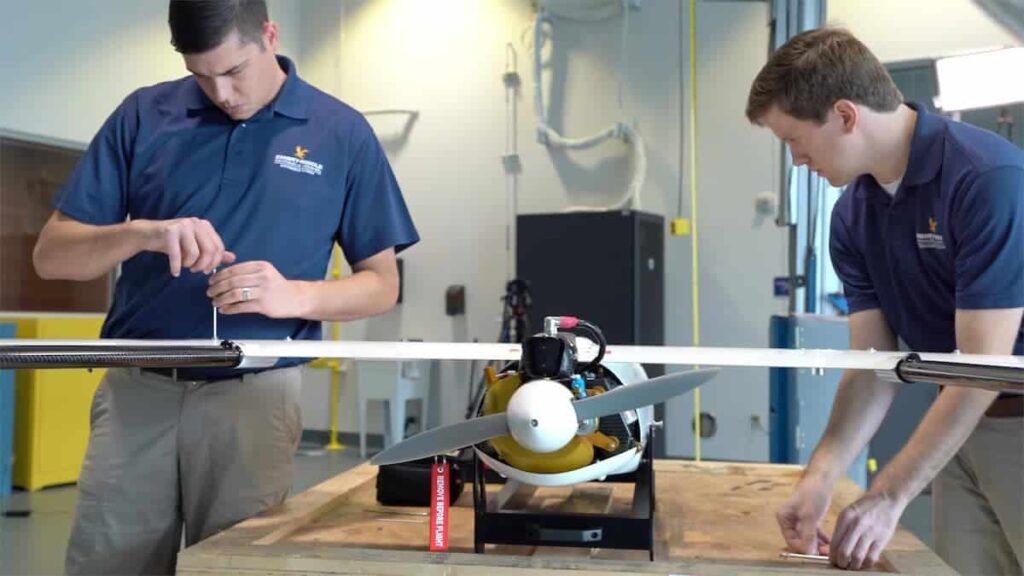 Embry-Riddle Aeronautical University has announced that it has become the only university to acquire the Penguin C long-endurance, long-range professional unmanned aircraft system (UAS). The Penguin C systems, supplied by manufacturer UAV Factory, were acquired specifically for flight training and will become accessible to students in spring 2020.

Embry-Riddle’s acquisition of the Penguin Cs has opened the door for missions controlled from multiple ground-based stations, called “remote-split operations,” as well as flight beyond the operator’s visual line of sight. The aircraft have applications for fighting wildfires, border patrol, search and rescue, oil pipeline and utility inspections, environmental assessments and military surveillance.

With a 10.8-foot wingspan, the new fixed-wing Penguin C aircraft are capable of flying up to 20 hours over a 60-mile range while carrying electrical, optical and infrared camera sensors. They promise a leg up for professional UAS pilots-in-training at Embry-Riddle, said Professor Mike Wiggins, chair of Aeronautical Science on the Daytona Beach Campus.

Embry-Riddle’s Unmanned Aircraft Systems Science program, established in 2011 as the first of its kind in the nation, encompasses three flight courses and one simulator course.

“Students currently learn to fly small fixed-wing survey platforms, and beginning in 2020, the military-grade Penguin C aircraft,” Wiggins said. “The goal is to ensure our graduates have the skills they need to run a successful business or operation using all types of UAS in a safe, responsible manner.”

At a time when hobbyists can obtain a small drone operator’s license by taking a written exam, said Professor Alan Stolzer, dean of the College of Aviation, “The goal of Embry-Riddle’s program is to train highly qualified, professional UAS pilots who have deep knowledge of best practices in mission planning, data collection, data delivery and safety protocols.”

Two recent graduates with unique industry experience are playing a key role in the transformation of Embry-Riddle’s UAS program.

Shane Aldridge (’15) and Mike “Zeb” Zebehazy (’10), who both worked for aerospace and defense company Textron Systems, were recruited by Embry-Riddle to help run the university’s Penguin C fleet, based on their knowledge of a similar platform called the Aerosonde. They are working with Alexander Mirot, associate professor of Aeronautical Science, whose Air Force experience provided him with deep knowledge of unmanned aircraft such as the MQ-9 Reaper.

Aldridge and Zebehazy spent a month in Latvia training to fly Penguin Cs before the aircraft arrived at Embry-Riddle. “We learned how to pack the parachute that helps the aircraft land safely, and how to maintain it and fly it,” said Aldridge, now a UAS Flight Supervisor at Embry-Riddle.

For long-endurance missions, Aldridge explained, “it’s all about the sensor you’re carrying on the aircraft.” The sensor on Embry-Riddle’s Penguin Cs, stabilized by a gimbal, carries either an electro-optical camera with a 30-power zoom lens for daytime use or a long-wave infrared sensor that captures images in darkness.

Currently, the Penguin Cs are being tested over controlled airspace near Bunnell, Fla., about 25 miles north of the Daytona Beach Campus. Zebehazy, UAS Maintenance and Inventory Manager, said the university is working on applications for FAA waivers that would allow students to fly the Penguin C’s over the Bunnell field via a remote-control operation in Daytona Beach. Because the aircraft have a digital datalink, the goal is to fly them through a network connection, Aldridge noted.

If the FAA waivers are approved, he said, Embry-Riddle would become the only organization other than the military with remote-split UAS capability.

Embry-Riddle launched the first Unmanned and Autonomous Systems Operations degree program in the nation in 2011. It is the single largest UAS educator in the world, with more than 1,500 students enrolled in various UAS undergraduate and graduate degree programs across two residential campuses as well as Embry-Riddle Worldwide, the university’s online campus.

Leveraging UAS technology to promote safer, more secure public spaces – through collaboration with law enforcement and other first responders to crime scenes and natural disasters – is an Embry-Riddle priority. Researchers are applying UAS technology to improve crop, livestock and aircraft inspections, and to advance transportation and on-demand drone-based delivery. They are even using UAS systems to help preserve cultural heritage sites.

Embry-Riddle plays a central role in the FAA’s ASSURE (Alliance of System Safety for UAS through Research Excellence). The university also operates the FAA’s Next Generation Air Transportation System.