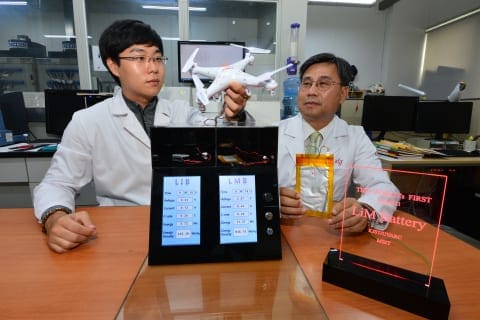 Researchers at the Korea Institute of Science and Technology (KIST) have announced that a new Lithium Metal Ion battery has been developed that possesses twice the energy density of conventional Lithium Ion batteries, which are commonly used in small unmanned aerial systems (UAS). The developed Lithium Metal Ion batteries are capable of maintaining 80% of the initial performance after going through more than 1,200 charge/discharge cycles.

Dr. Won Il Cho, or principal researcher at KIST, stated: “We managed to develop essential technologies that can improve the performance and the safety of the Lithium Metal Ion batteries which can be potentially applied to various industrial applications, especially for unmanned vehicles.”

The technical details of the lithium battery were published in ‘Nature Energy, IF(46.859)’, and key findings of developing an artificial protection layer for lithium metal anode and optimized electrolyte formulation were demonstrated to improve the battery performance and safety.

The Lithium Metal Ion battery utilizes metallic lithium as the anode, which has about a 10-fold higher capacity than that of conventional graphite anodes, providing approximately triple the energy density, both volumetrically and gravimetrically, of Lithium Ion batteries. Metallic lithium anode-based battery systems are thus currently garnering much interest as a possible next generation system of lithium ion batteries. However, physicochemical instabilities of metallic lithium anode under the electrochemical processes induce formation of lithium dendrites and side reactions that potentially cause an internal electrode shorting and low Coulombic efficiency, which increases the risk of battery thermal runaway and short cycle life.

To overcome the issues, the research team at KIST developed a new approach to fabricating a functionalized graphene-based artificial solid-electrolyte interphase layer, termed as Langmuir-Blodgett Artificial Solid-Electrolyte Interphase, onto the lithium metal anode along with a suitable electrolyte formulation to stabilize lithium migration reversibly occurring at the electrodes in Lithium Metal Ion batteries.

The results may pave the way to surpassing the theoretical capacity limits of Lithium Ion batteries and further developing and producing high performance batteries for consumer electronics.