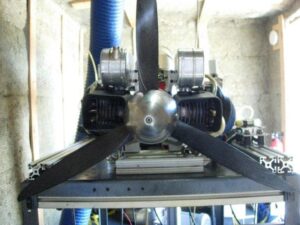 The FAR 33 test, prescribed by the Federal Aviation Administration (FAA), is an airworthiness standards endurance test for aircraft engines. An engine must be run for a specified number of cycles under predefined loads and operating temperatures while being monitored for performance changes and component failures. The engine is commanded to various speeds that are representative of what it is likely to experience in flight.

The IntelliJect ECU (engine control unit), designed in-house by Power4Flight, controlled the engine throughout the test and it also succeeded in passing the FAR 33 Profile. The B100i, with a quiet exhaust and rated at 4.3kW, was run through a series of RPM profiles intended to test the engine under high stress. The engine was non-invasively inspected before each daily run period of 8 hours.

After completing the 150-hour run, an engine tear down was performed on the facilities. Overall the engine was considered to have run well throughout and after the test, with Some improvements to the muffler design being highlighted as a result of the testing program.