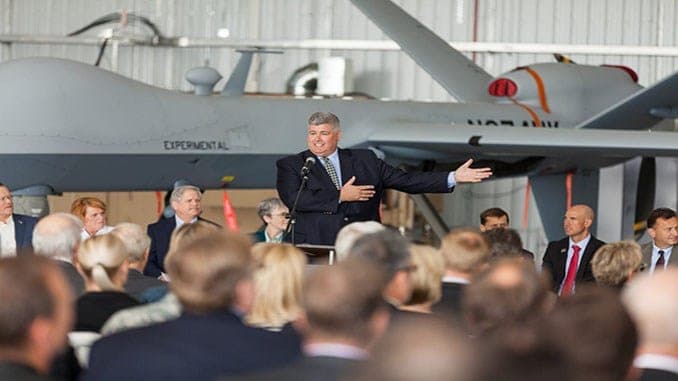 “Flying large UAS beyond visual line of sight in the national airspace will allow the unmanned aircraft industry to demonstrate its true potential for contributing to commercial aviation operations,” said Thomas Swoyer, Jr., president, Grand Sky Development Co. “It reduces the cost for operators to test and prove systems and provides the opportunity for real-world demonstrations of how unmanned and manned aircraft can share the skies safely and efficiently. Achieving federal approval for these flights was truly a group effort and we can’t thank everyone involved enough for their hard work to make it happen.”

BVLOS flights at Grand Sky are monitored through a unique system that combines several methods of surveillance into one stream. One-way access to Grand Forks Air Force Base’s radar feed is linked to locally installed ADS-B Xtend and FAA NextGen systems through Harris Corporation’s RangeVue system to provide operators with real-time situational awareness of both manned and unmanned aircraft.

Grand Sky was the first location in the U.S. to receive regulatory permission to host commercial BVLOS test flights for large unmanned aircraft. The approximately 36-month process was led by the Northern Plains UAS Test Site (NPUASTS), which will now also aid operators seeking certificates of authorization (COAs) to conduct BVLOS flights within the approved air space at Grand Sky.

“The milestone of removing a chase airplane from these operations is literally years in the making with multiple stakeholders from private industry, FAA, and DOD coming together to find an achievable solution,” said Nicholas Flom, executive director, Northern Plains UAS Test Site. “The persistence has paid off and I can’t wait to have the UAS industry advance their programs in North Dakota with this approval.”

All large UAS flights from Grand Sky are launched and recovered at the Grand Forks (N.D.) Air Force Base runway. BVLOS flights will be managed by Grand Sky in partnership with the NPUASTS. Initial BVLOS flights at Grand Sky will be limited to large UAS flying within 30 nautical miles of Grand Sky and will be subject to several additional FAA restrictions while flight data is accumulated to demonstrate the safety of BVLOS flights.

GA-ASI, one of the largest UAS manufacturers in the world and a tenant at Grand Sky, is conducting initial BVLOS flights at Grand Sky and will collaborate in gathering data and proving the process, to the benefit of the entire UAS industry. Under separate regulatory approval, GA-ASI recently conducted the first-ever trans-Atlantic flight of a medium-altitude, long-endurance UAS, launching from its location at Grand Sky and landing at Gloucestershire, United Kingdom.

“GA-ASI has been focused on certifying Medium-altitude, Long-endurance (MALE) UAS to fly in National Air Space (NAS) for many years,” said David R. Alexander, president, Aircraft Systems, GA-ASI. “FAA approval to fly BVLOS flights from our Flight Test and Training Center (FTTC) gets us another step closer to earning certification for MALE UAS to fly in the NAS.”

As processes are proven, Grand Sky expects its BVLOS range will eventually be extended to include the entire state of North Dakota and all classes of aircraft flying at higher altitudes. The park’s surveillance system is also currently capable of supporting operations for aircraft flying within 60 miles of the radar.