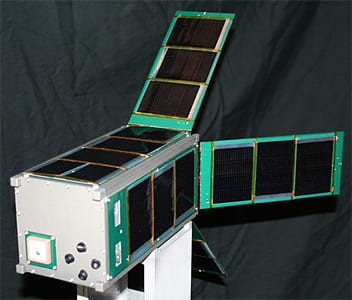 Alta Devices has announced that a successful CubeSat mission by Twiggs Space Lab, (TSL), NearSpace Launch (NSL) and NanoRacks was powered by the company’s solar cell technologies. The Asgardia-1 satellite was based on NSL’s FastBus platform and powered by approximately 24 watts of Alta solar cells. Launched on an Orbital ATK (now Northrop Grumman) cargo resupply mission, the 2U-size FastBus was inserted into a 475 km low earth orbit via the NanoRacks External Cygnus Deployer. The 2U satellite carried a payload which included a solid-state memory experiment and particle detectors used to determine the actual effects of on-orbit radiation.

TSL, NSL and NanoRacks are pioneering new, disruptive models of satellites that are much smaller, simpler, and more affordable. Their mission is to broaden access to space for educational as well as commercial participants. They selected Alta Devices solar technology due to its unique modular, lightweight, and high efficiency characteristics.

Bob Twiggs, founder of TSL, states, “Our goal is to inspire future generations of engineers and scientists through innovation in the field of space. Alta Devices technology is easy to integrate, and its modular form factor is well-suited to the standardized dimensions of CubeSats. Our team is excited about the potential to innovate and rapidly prototype using this technology”. Dr. Hank Voss, founder of NearSpace Launch, Inc. adds, “With the FastBus, we aim to provide a reliable, affordable, and quick-turn CubeSat platform built on our heritage of communication and bus technologies. We are very excited to be using Alta Devices technology to serve the needs of our stakeholders.”

NanoRacks CEO, Jeffrey Manber, said, “At Nanoracks, we’re focused on lowering the barriers of entry to space. We see adoption of innovative solar and bus technologies as another critical piece of the puzzle in making space exploration accessible to entrepreneurs, scientists, students, corporations, and space researchers around the world.” About Alta’s glass-free solar cells he added, “any component that is more robust, withstands the launch loads, and maintains a clean ride-share environment is going to make things easier for everyone on a practical and regulatory perspective. The Alta solar cells came through with flying colors on the Asgardia-1 satellites.”

CubeSats (satellites weighing less than 15kg) were originally developed for university students to participate in space research. The standard has now been adopted worldwide and has helped to ignite a small satellite revolution. Typically placed into low-earth orbits, they often have standardized or off-the-shelf components and have facilitated more affordable and easier access to space. CubeSats are driving new industries via the explosion of big data accessible from space.

All satellites need solar cells to generate electrical power. Until now, no commercial solar technologies could match the improvement in cost, weight, and ease of use that other components of small satellite technology have achieved: solar cells are traditionally expensive, fragile, rigid, and difficult to encapsulate and robustly attach to spacecraft.

Jian Ding, CEO of Alta Devices, explains, “Innovation in solar is essential to the continued evolution of small satellite technology. The industry has seen disruptive change in every technology area except in solar cells. Solar cells were expensive, challenging to integrate, and hard to procure, until now. The success of the FastBus mission provides another data point validating our technology and further cements our commitment to our partners as they plan their upcoming launches.”