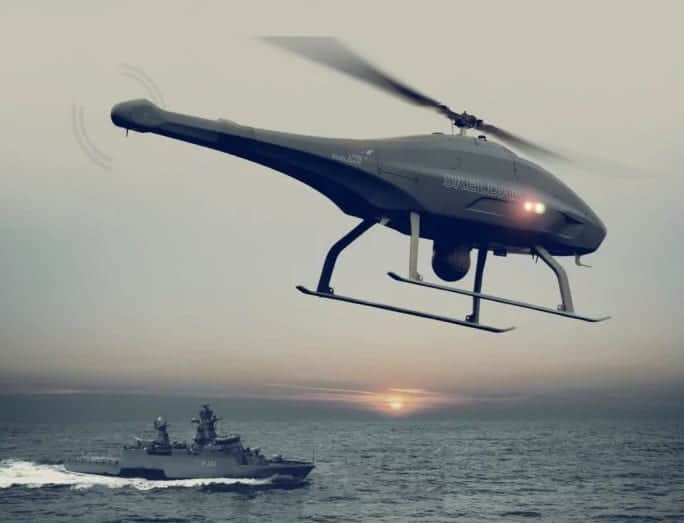 The SKELDAR V-200B completed its trials following an intensive modification audit, based on in-theatre performance feedback and the strategic imperative to further widen competitive advantage.

“It is no secret that more players are attempting to enter the maritime market for rotary UAVs. Recent navy contracts have stipulated the role and specification, and this has confirmed our strategy of development is absolutely the right move at the right time. We are able to fly longer, over five hours, at maximum payload capacity through weight savings from design modifications and our 2-stroke engine configuration provides significantly unmatched time between overhauls (TBO), all of which are vital to maritime operations by military and civilian customers,” said David Willems, Head of Business Development at UMS SKELDAR, the UAV joint venture between Sweden’s Saab and UMS AERO of Switzerland.

The past 12 months have witnessed substantial corporate strategic initiatives for UMS SKELDAR, thanks to a new senior management team, headed by ex-Saab industrial business head Axel Cavalli-Bjorkman. Achievements include:

According to Willems, the SKELDAR V-200B has an unassailable lead on its competitors, from endurance and robustness to maintenance regimes and proven payload sensors. The Hirth-developed engine, with heavy fuel licensed technology from Australia’s Orbital Corporation, was the first medium maritime UAV engine to be heavy fuel capable, able to operate on Jet A-1, JP-5 and JP-8 fuels.

“The major difference between the SKELDAR V-200 engine and those of our competitors is that our engine is more tolerant of the JP-5 quality and that is a big advantage. Our maintenance schedules and ease of access to engine compartments mean that we outperform and stay longer in the air before any need for overhaul. These are non-negotiable advantages for operational commanders,” explained Willems. He also cites the partnership with Sentient Vision Systems ViDAR (Visual Detection and Ranging), a proven airborne persistent wide area maritime search system that autonomously detects objects on the ocean surface.

Programmes and deployment including the Spanish Navy European Union Naval Force (Op Atalanta) and Indonesian military (TNI) have all informed the advancement of the SKELDAR V- 200B.

“Our commitment to development of the pioneer in mid-sized rotary UAVs continues. The SKELDAR V-200 was conceived as a maritime platform, and our competitive advantage ranging all elements backed by our global resources, provides customers with the assurance of capability, performance and support wherever they need to be,” added Cavalli-Bjorkman.