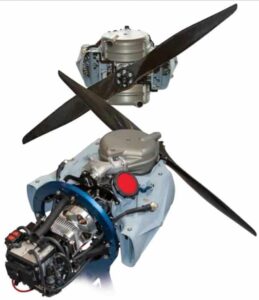 Northwest UAV (NWUAV) has announced that it has begun the manufacturing and parts procurement for the company’s new NW-88 multi-fuel twin-cylinder engine. Utilizing the same team that developed their internationally recognized NW-44 multi-fuel single-cylinder engine, NWUAV has begun to take the necessary steps to complete a prototype of the NW-88 engine to demonstrate exactly how it will function.

“Early on we recognized that Group II UAVs (unmanned aerial vehicles in the 40-75- pound weight class) were attempting to fly 12 hours or more in extreme conditions with the only engines they had available, which were hobby-grade engines designed for the weekend flier,” remarked Chris Harris, President and Owner of NWUAV. “They needed a more reliable, efficient, cost effective engine solution, and that’s how the NW-44 engine was born. Due to their still relatively small size, Group III UAVs (in the 75-150-pound weight class) are experiencing the same endurance and reliability issues in their engine options that the Group II UAVs were facing. With the NW-44 and 1000 flight hours of experience, NWUAV is primed to deliver their next professional-grade engine for Group III UAVs rapidly and successfully.”

With the ground-up design of the NW-44 engine to work from, the manufacturing and parts procurement for the NW-88 twin-cylinder multi-fuel engine for Group III UAVs has already begun. The same team that completed the work on the NW44 engine has begun manufacturing the cases and programming the quiet mufflers to fit the NW-88 engine prototype. Next, the team will tackle building the first NW-88 puck.

“Now that the NW-44 single-cylinder multi-fuel engine is firmly established as the new industry standard for 40-75-pound UAVs, we can efficiently adapt that design to support 75-150-pound UAVs,” Chris Harris continued. “And like its smaller, older brother, the NW-88 engine is set to be a complete engine system ready to install with minimal or no development costs for the end customer – a plug-n-play engine if you will – making it highly cost effective to adopt on existing platforms or incorporate into new designs.”

A completed prototype of the NW-88 multi-fuel twin-cylinder engine is set to be on display for the first time at the AUVSI XPONENTIAL 2018 trade show in Denver.