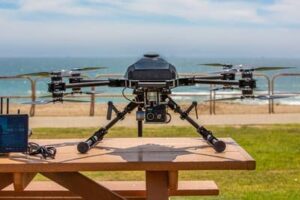 xG Technology, developer of the IMT and Vislink live video communications systems, has announced that it has entered into a partnership with K2 Unmanned Systems to develop K2’s new law enforcement tactical drone, the Knight Hawk. IMT Vislink is providing interoperable, encrypted HD video downlink technology for use with the Knight Hawk, which is the first U.S.-designed and assembled law enforcement tactical UAV (unmanned aerial vehicle).

K2 announced the release of the Knight Hawk at the 29th Annual APSA Fly-In Training, a private event hosted by the Pasadena Police Department to network, and train, and display new technologies.

John Procacci, Vice President of Sales, said, “We are pleased to collaborate with K2 on their exciting new drone system. Our mission has always been to provide live, real-time video communications that deliver actionable intelligence from all aerial platforms to law enforcement personnel, and this project with K2 is the latest example. We look forward to working with K2 to ensure that our downlink system delivers maximum situational awareness for use in tactical operations.”